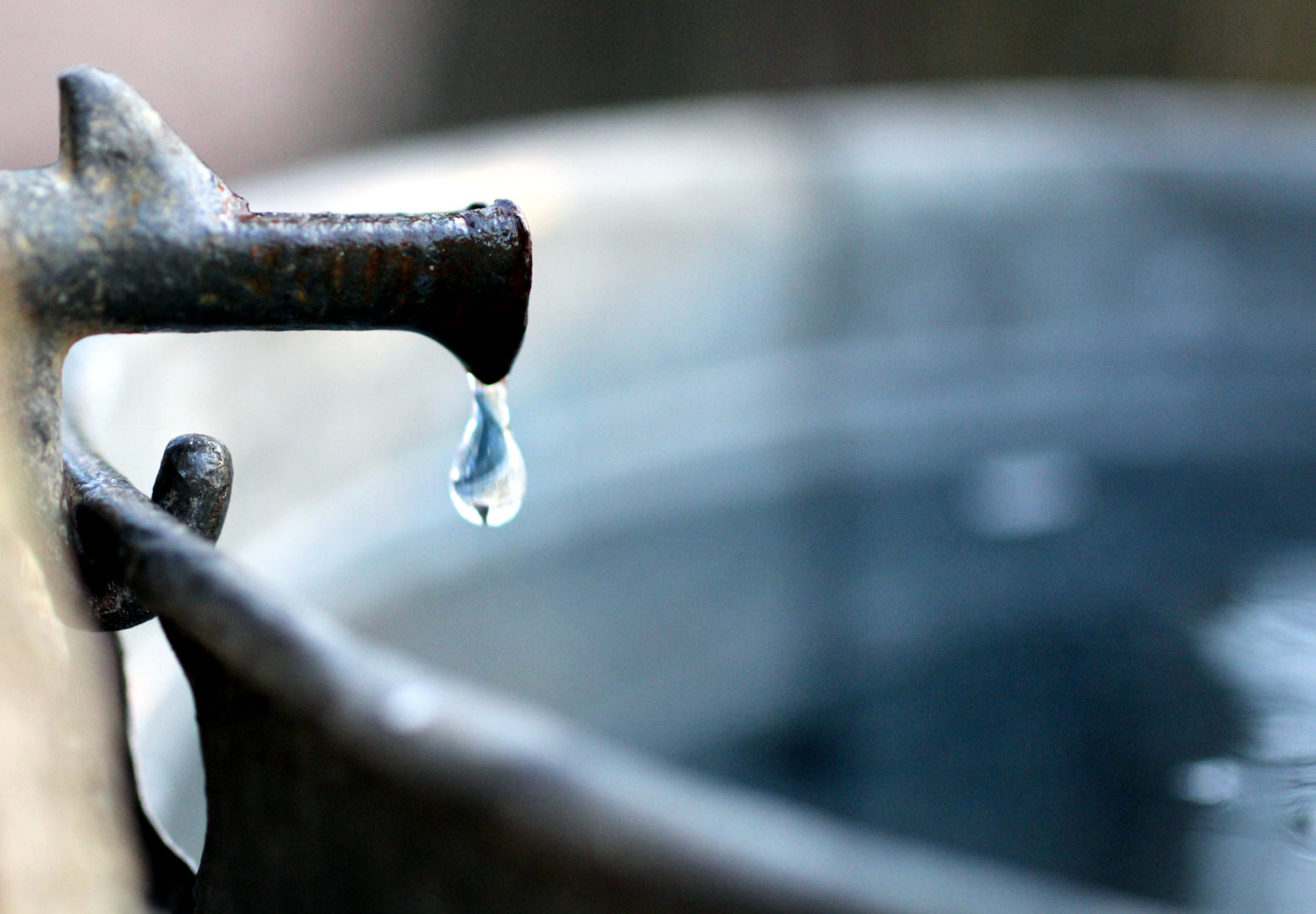 TL;DR — Expanding on the summary I gave in Apply Filters episode 35 on our move from Campaign Monitor to Drip. I wrote a PHP script (below) to sync subscribers from one to the other.

As you may have noticed, we’ve kicked things up a notch here on the blog in the past couple of months. The goal has been to publish one high quality, original piece of content (blog post, video screencast, documentation, etc) for WordPress developers every week. Each member of the team takes their turn writing and the rest of us pitch in to refine it. Prior to this, we published on average once per month and it was always news about WP Migrate DB Pro.

For those subscribed to our mailing list, going from a monthly email to weekly is a pretty huge jump. I wanted to give them the ability to easily opt out of the weekly emails but continue to get news about WP Migrate DB Pro. I started tinkering with Campaign Monitor (our email marketing software), hoping it wouldn’t be too difficult.

I created a “Receive emails about” custom field. Then when someone unsubscribed, they would get a screen asking what they’d like to unsubscribe from exactly. 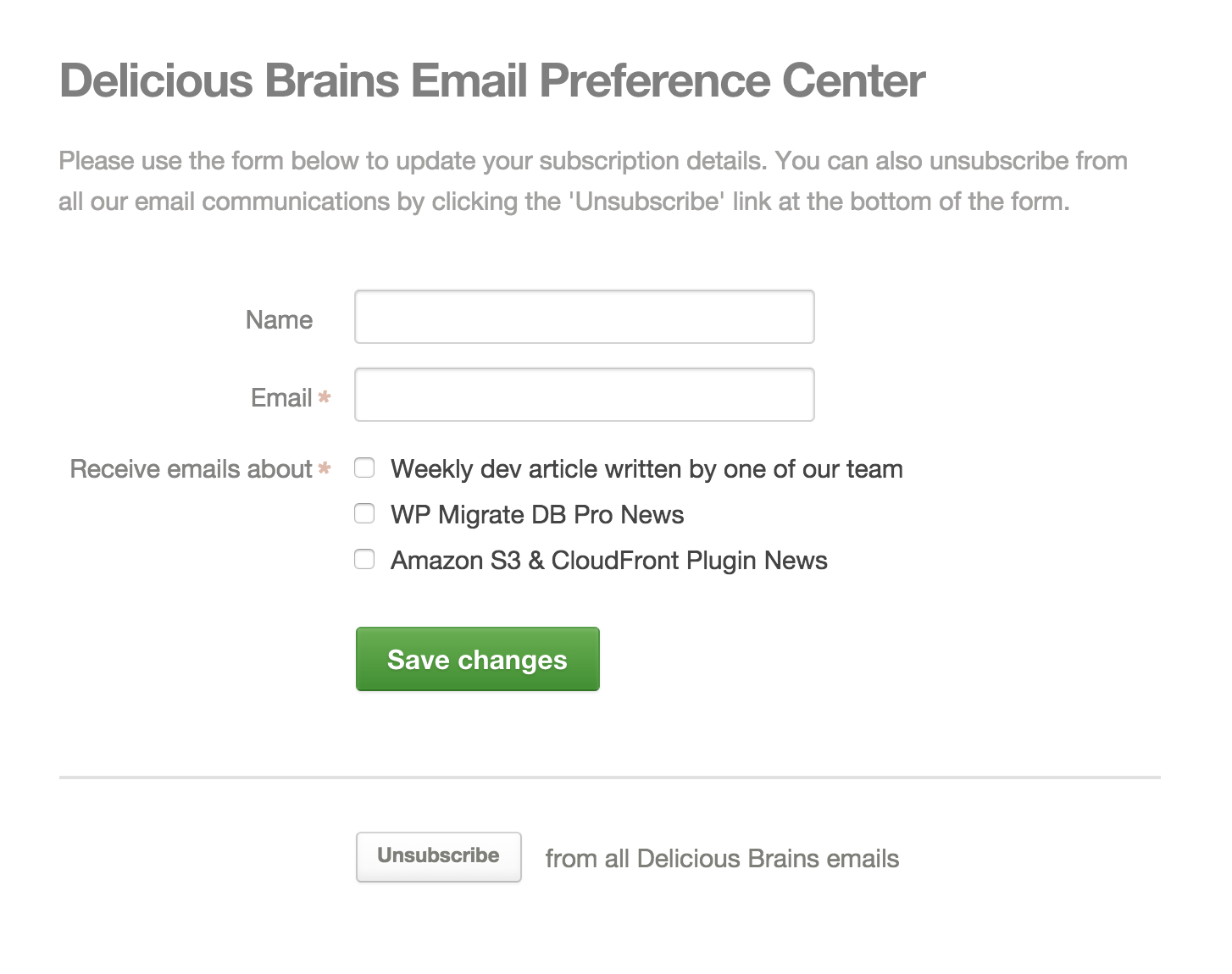 Great, exactly what I wanted. Now to update the subscribe forms on our site.

I wanted the form on our blog (the one that pops up when you scroll to the bottom) to only subscribe people to the weekly article list.

This was a problem.

When you submit the subscribe form, it overwrites the entire “Receive emails about” setting. For example, if you were already subscribed to “WP Migrate DB Pro News”, submitting the form on our blog would unsubscribe you from it in addition to subscribing you to the weekly article.

I emailed Campaign Monitor support and they suggested I work around this using their API. Dang. I was really hoping to not have to go down the rabbit hole, but there I was with my nose in the dirt.

I’d been considering moving to more powerful email marketing software for a while but it had never been a priority. Campaign Monitor had worked ok for what I needed so far. But since I had to sink a bunch of time into API coding anyways, I decided I might as well do it against a new API.

I’d been enjoying listening to Rob’s journey with Drip on the Startups for the Rest of Us podcast. I liked what I’d been hearing more recently with his shift to building out more of a marketing automation solution. It sounded like a platform that we could grow into and that would continue to grow with our needs.

After signing up and tinkering, I found that Drip met our immediate needs nicely. It did take some time to get my head around Drip though as some things are conceptually different than Campaign Monitor. For example, a “Campaign” in Drip is really more like a “List” in Campaign Monitor.

How is Drip different?

Rob does a great job explaining the differences between Drip and MailChimp, which is very similar to Campaign Monitor:

Examples of things Drip has that MailChimp does not:

On the flip side…MailChimp has many features Drip does not. Examples: 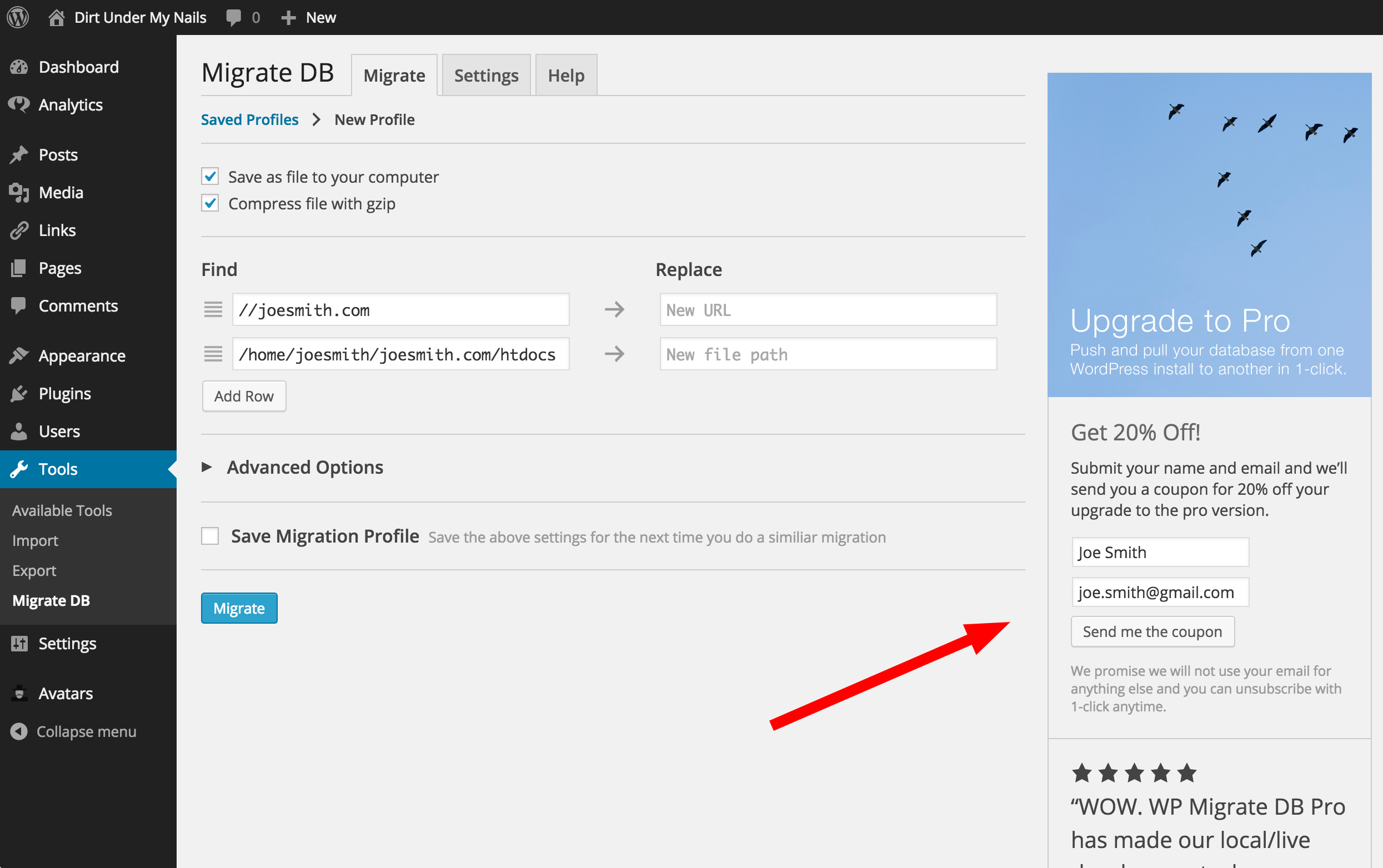 Sure, the forms will be updated in the next plugin release, but that might not be for a while. Plus, not everyone upgrades their plugins. There was definitely a need to keep the existing Campaign Monitor lists in place and sync any new subscribers to Drip.

Originally I thought I would just export a CSV from Campaign Monitor and import it into Drip. No big deal. But after realizing the need to do syncing, I was definitely going to need a script.

Our lists in Campaign Monitor are a bit of a mess. We have a list for each of the different places people subscribe from, which also determines what they’re subscribing to. 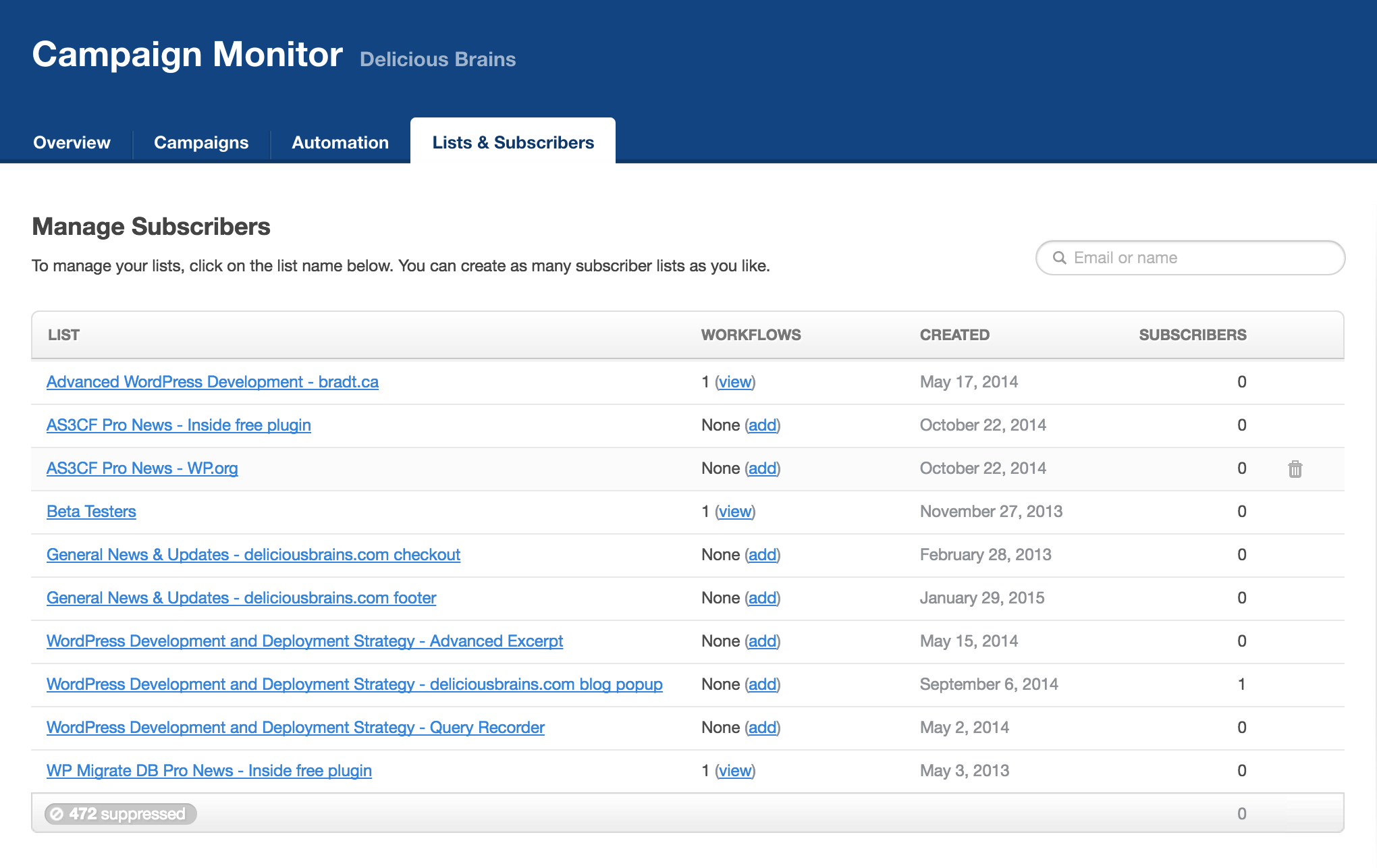 Obviously it would be nice to clean things up in this move. In Drip, I set up three campaigns:

Now when a subscriber chooses to unsubscribe from a campaign, they get a similar page to the one I had setup with Campaign Monitor. 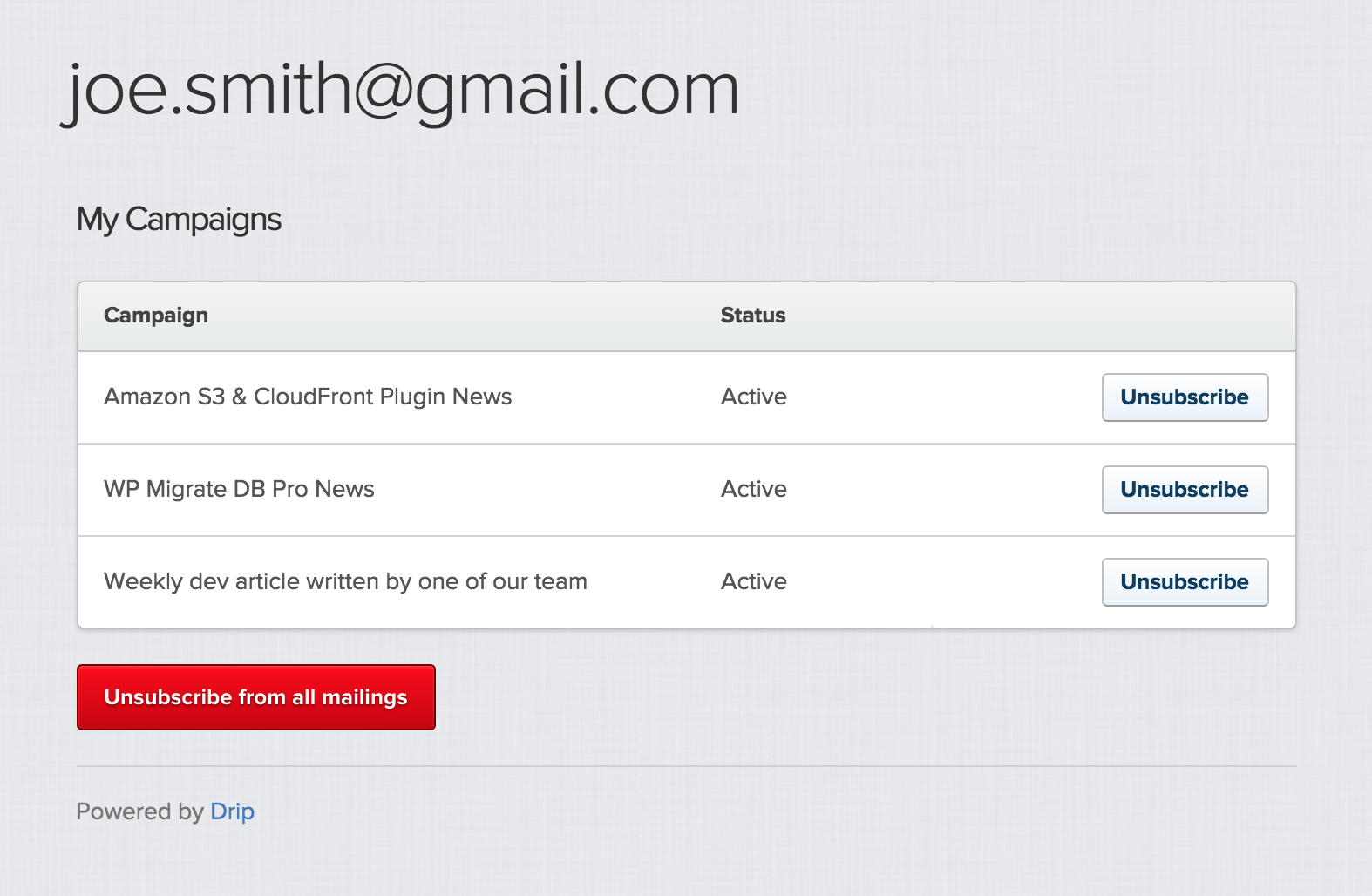 Each Campaign Monitor list relates to one or more campaigns in Drip. As for the source, we can store that in a subscriber custom field in Drip.

The sync script does exactly this. It goes through each Campaign Monitor list and for each subscriber:

The script ran our initial move to Drip, copying over several thousand subscribers. It now runs every 10 minutes on our server as well to continue syncing new Campaign Monitor subscribers to Drip.

Why record the source as a sentence fragment?

You may be wondering what’s up with storing the source as a sentence fragment. Seems kind of odd, I know. In addition to knowing where subscribers are signing up from, I also wanted to remind the subscriber where they signed up in the emails we send.

Storing it as a sentence fragment allows me to easily insert it into emails with a template tag. In our emails the source shows up at the bottom next to the unsubscribe link. 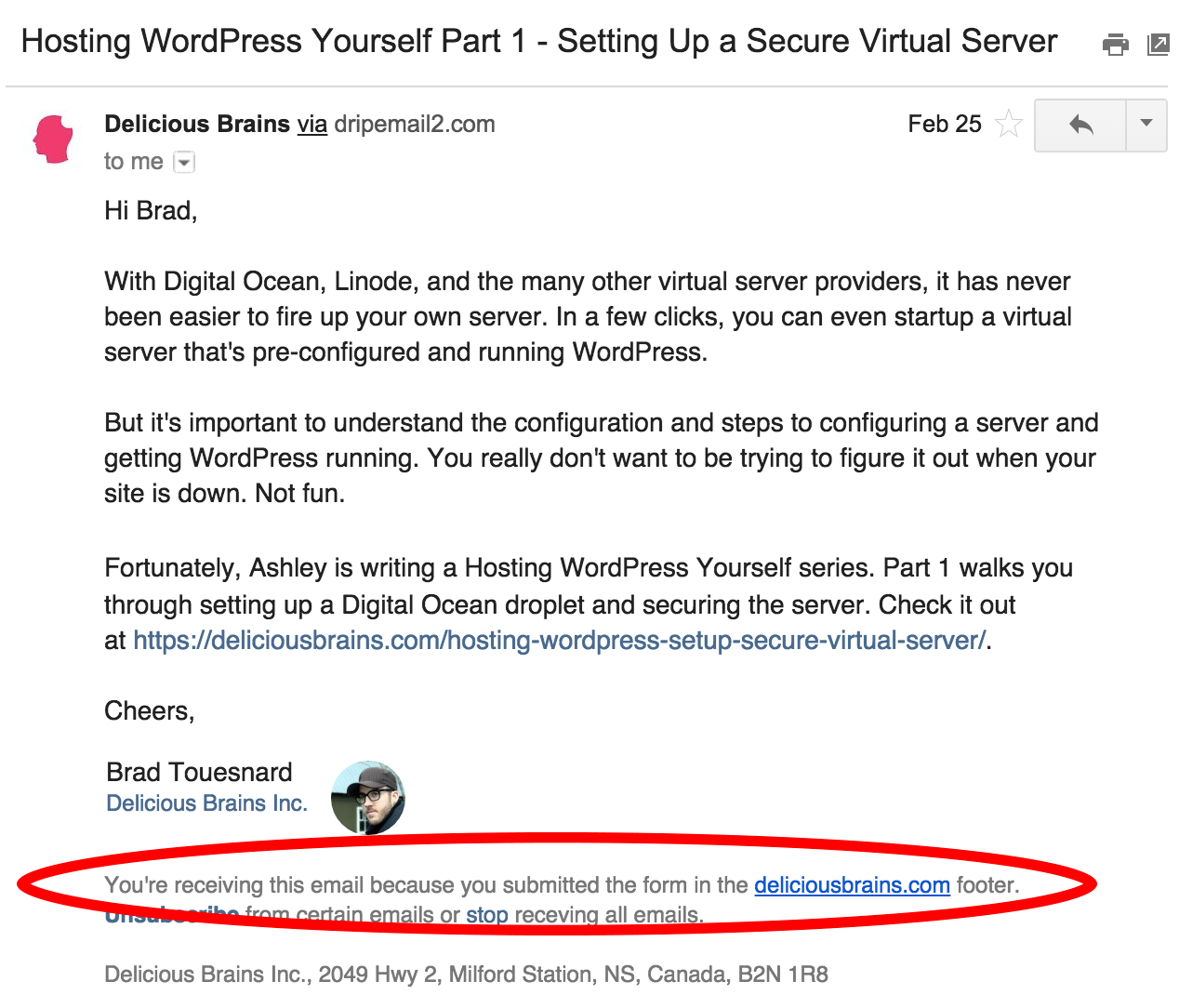 I was using autoresponders in Campaign Monitor. When someone subscribed via the form inside the WP Migrate DB plugin, it would automatically send them an email containing a coupon code expiring in 2 weeks. Then 13 days later it would send them a reminder that their coupon code expires tomorrow.

Unfortunately, there was no way to tell Campaign Monitor not to send that second email if the customer had already purchased. So every once in a while we’d get a complaint about that second email. And I don’t blame them. It’s not a great start when the company you just purchased from doesn’t seem to know you’re a customer.

Yes. Very much. I’ll admit, I was unsure at first, but the more I use it, the more comfortable I get, and the more I like it. The UI is clean and a pleasure to use. I’m looking forward to doing some more integration with our site as I know we’ve only scratched the surface of what it’s capable of.