If you haven’t heard of it, October is a PHP-based content management system that strives to be simple where other CMS’s are complex. Minimizing clutter and making it easy to be productive is the name of the game here, and it’s one of the things that caught my eye. Also, it’s based on Laravel, so it’s sure to be appreciated by developers familiar with the framework.

October was one of the first content management systems that came to my mind when I started planning out this series. I first heard of it a few years ago when it was initially released and I’ve been meaning to give it a look ever since.

Since it’s officially October there’s no better time to check it out and compare it to WordPress, so let’s dive right in!

To install October, you’ll need to download the installer from the October website. After unzipping the installer and dropping it into the root of your website, you’ll also need to create a MySQL database, at which point you can start the installation process. 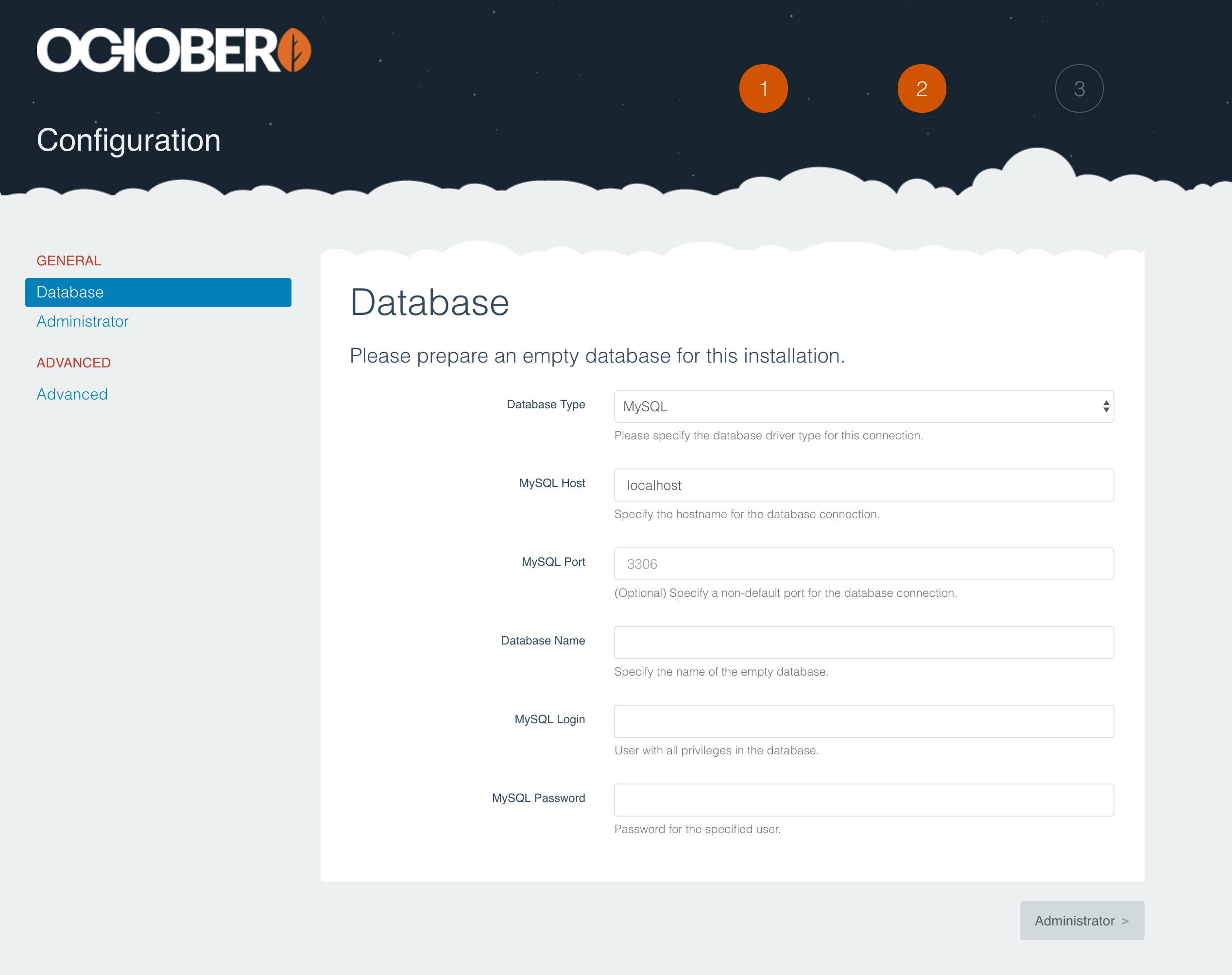 It’s worth noting that October is much more strict in its server requirements than WordPress, with the biggest difference being that it requires PHP 7 or above. In other words, this isn’t your dad’s CMS.

While developers will likely relish the fact that they will be able to take full advantage of PHP’s more modern features, requiring PHP 7 will also be a non-starter for users that are stuck on hosts using older versions of PHP.

Winner: It’s a close one. Both October and WordPress make it easy to get up and running. However, I prefer the approach that WordPress takes, showing you one thing at a time and keeping things as simple as possible. You can also skip parts of the installation with WordPress by manually editing the wp-config.php file.

When logging into the dashboard for the first time, the first thing that I noticed was that it’s very different compared to WordPress:

October aims to be a simple, clutter-free CMS, and it shows. There are only three top-level menu items: CMS, Media, and Settings. The CMS tab is where you’ll go to create and edit pages, as well as partials and layouts (more on that later).

Editing a page reveals two tabs – Markup and Code. The Markup tab is where you’ll enter the HTML and text content for the page (no WYSIWYG editor here), and the PHP code section.

The Media tab is similar to the Media Library in WordPress – a centralized place to upload and store your media. It supports bulk uploads, custom folders, and sorting media by media type. By installing the October Drivers plugin, you can also configure the October media manager to store files in Amazon S3. 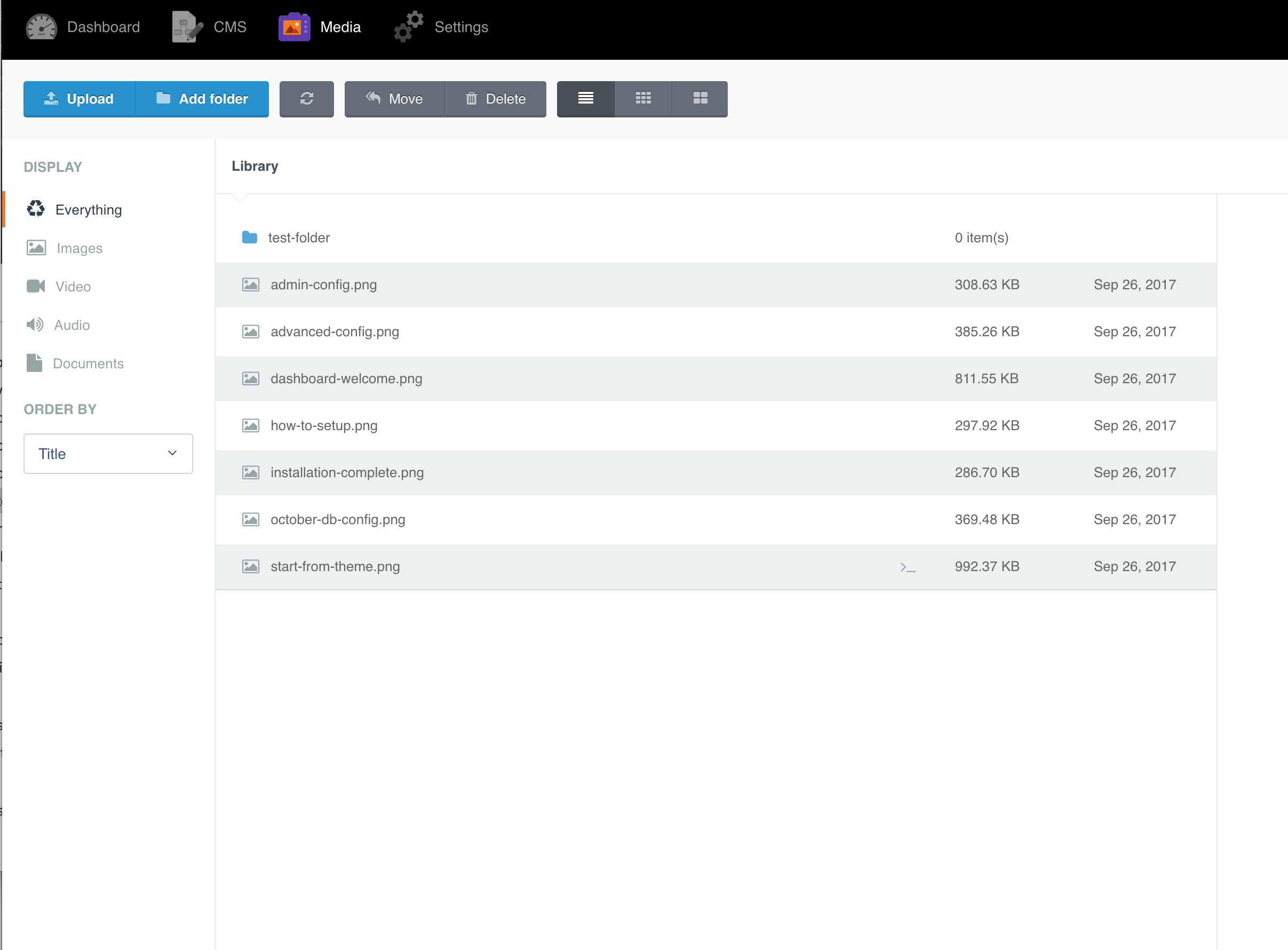 Diving into the Settings tab, it becomes apparent that October offers a high level of customization, possibly exceeding what is possible with WordPress out-of-the-box. In October, you can change the look of the text editors, email templates, and virtually everything else about the CMS directly from the settings page.

Winner: Tie. I really like some aspects of both WordPress and October, and I think a perfect CMS would blend elements from both. While October is definitely well-suited for developers, I think less-technical clients would likely have some trouble with creating and editing content.

October uses the increasingly popular Laravel PHP framework for most of it’s core architecture, while WordPress has sort of made it’s own framework over the years. It also mostly conforms to PSR-2 coding standards, which helps to keep the codebase clean and consistent.

And as I mentioned before, October requires PHP 7 as the minimum PHP version. This is a huge leap forward, even when compared to some of the other more modern content management systems, and it means that October will be blazing fast and have access to PHP’s newest features.

Winner: October. Since it’s using the Laravel PHP framework and has PHP 7 as the minimum supported PHP version, October has a night-and-day better core architecture than WordPress.

October takes a different approach to themes. While there are pre-built themes that you can install like with WordPress, the real magic is in October’s layouts and partials. Since October uses the Twig templating engine, it’s easy to create themes that use dynamic data.

To create a theme, you head over to the CMS tab and create a new layout. This will have the HTML and any Twig template tags necessary to render the page. 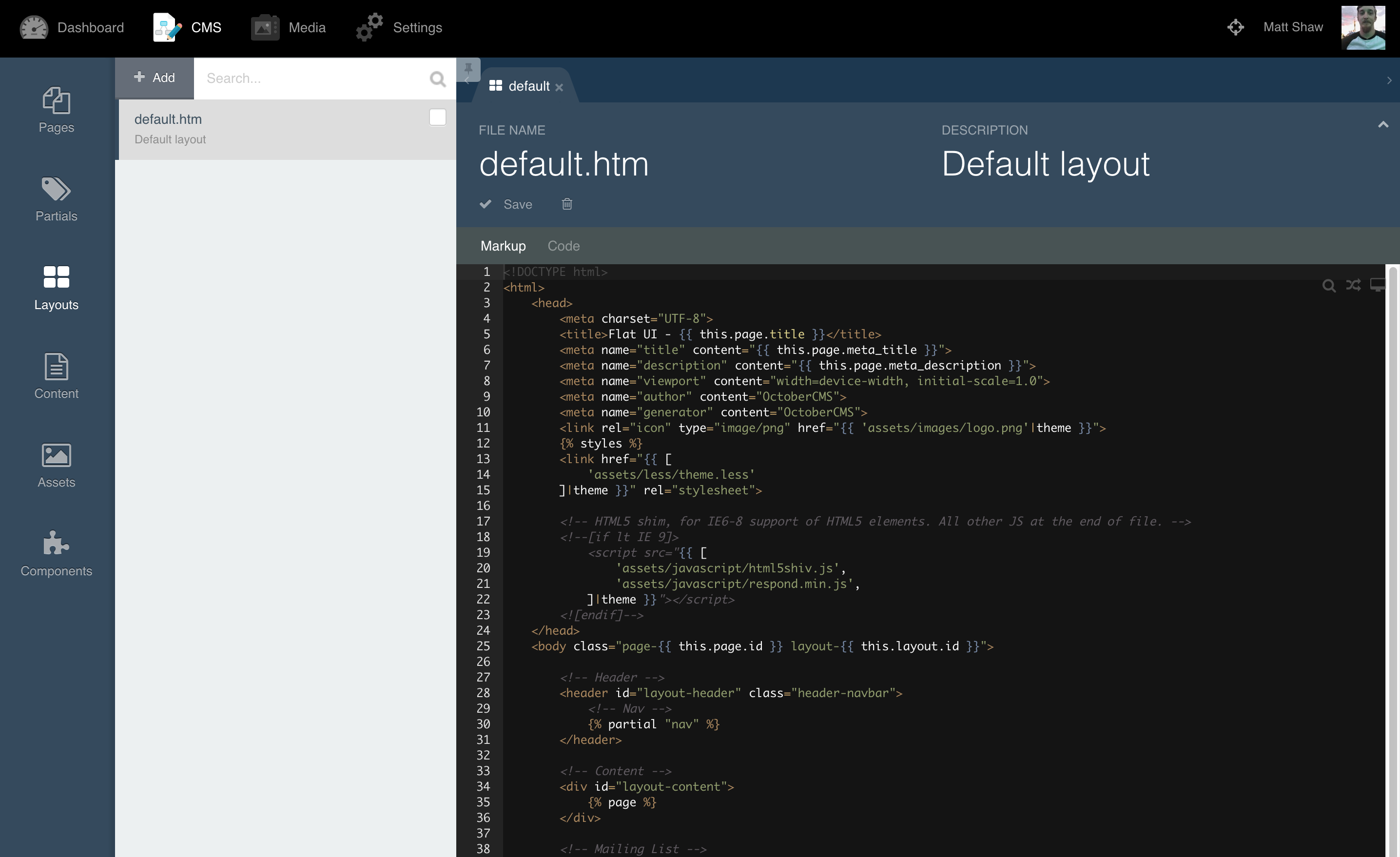 Winner: WordPress will win if you’re looking for a pre-made theme, but October’s layout system and templating engine are far superior.

Much like WordPress, October has an integrated plugin repository that you can access from the dashboard to download new plugins. With less than 500 plugins, it can’t keep up with the huge amount available for WordPress, but the October Marketplace is well-organized and offers both free and paid plugins.

Winner: WordPress. Since it has over 50,000 plugins, it’s impossible not to find a plugin that does what you’re looking for. But I have to give kudos to the way that October seamlessly integrates both paid and free plugins in the official repository.

There’s no way to add custom fields to October out-of-the-box, so you’ll need to rely on existing plugins or create your own plugin. Custom fields aren’t that great for WordPress either, but at least there’s a way to add basic custom fields via the UI, and great plugins like Advanced Custom Fields.

Winner: WordPress. Even though custom fields isn’t WordPress’ strong point, at least there is a basic UI and plugins like ACF.

October and WordPress both make it easy to set up the URL format for SEO-friendly permalinks. October also has SEO plugins like SEO Extension and SEO Manager to manage meta tags, 301 redirects, and robot indexing.

Winner: Tie – both October and WordPress have SEO-friendly URLs and SEO plugins to add additional functionality.

This is an area where WordPress has consistently been a cut above the rest when compared to other content management systems. While WordPress doesn’t have any built-in eCommerce functionality, there are incredibly popular eCommerce plugins that have tons of first and third party support.

October also has several ecommerce plugins, with the most popular being JKShop. JKShop looks robust, with support for over 30 payment gateways and tax/shipping integration. However, with only 218 projects using JKShop, it’s not exactly battle-tested compared to some of the WordPress eCommerce plugins, and third-party integrations will take a while to catch on.

Winner: WordPress. With millions of sites using WordPress for eCommerce, there’s almost always going to be more plugins and extensions of existing plugins that make setting up any kind of store much easier.

October has both text documentation and API documentation that is easy to read and navigate. It seems to be well documented and I had no issues finding what I needed. 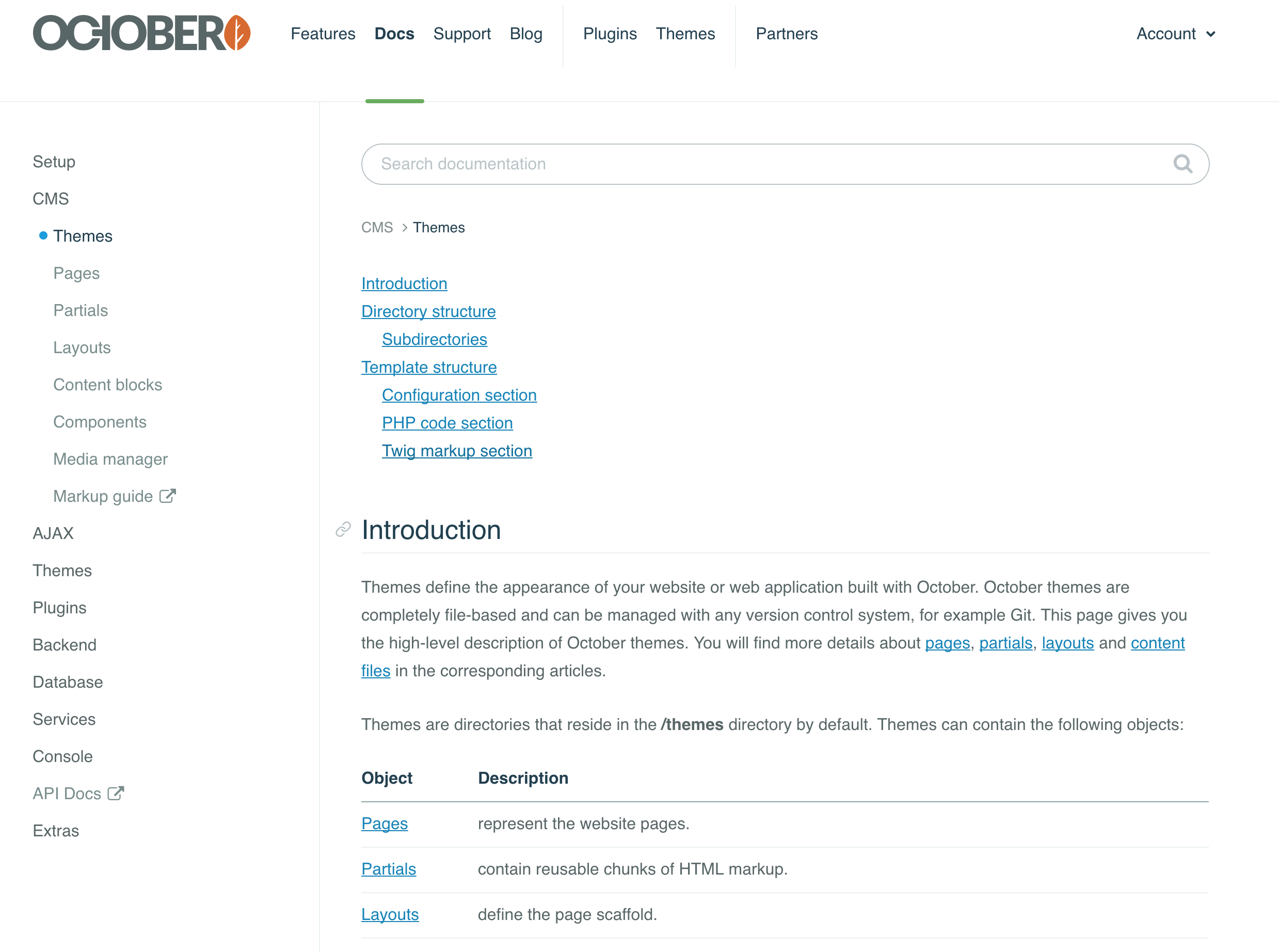 By comparison, the WordPress documentation feels a bit fragmented and there are several places to go to get different types of info. There is the main codex, the developer reference, and the handbooks.

Winner: October. I like how everything is easy to find since it’s all in one place.

October is open-source and uses the popular MIT license for the core platform. This is a less restrictive license than the GPLv2 license that WordPress is bundled with. Essentially, MIT licensed projects don’t require that projects that are modified be redistributed with the same license, while the GPL license requires that modified projects are redistributed with GPL licenses.

Free plugins in the October Marketplace also use the MIT license, while paid plugins come with either a Regular or Extended license. These licenses essentially limit the redistribution of the paid plugins, which could be a good thing or a bad thing depending on your perspective. However, there’s nothing stopping developers of paid WordPress plugins doing the same thing with WordPress.

Winner: Tie. Both October and WordPress are open-source and free!

It was really interesting to finally check out October CMS. It’s obvious that the CMS has matured in the years since release, and I can definitely see why some might prefer it over WordPress. The October Marketplace looks solid and it seems that with enough time, it could really take off.

Have you used October for any projects before? What did you think of it? Let us know in the comments below.