In the first post of this series, we started scaling our WordPress app to handle more traffic by extracting the database to a separate server so that we can eventually add multiple app servers to our infrastructure. In this post we’re going to do the same for the filesystem and also introduce a level of high-availability and high-reliability by building a replicated network filesystem using Gluster. But, before we start building a network filesystem it’s important to know why we need to do so in the first place.

Reminder that in this series, we’re building upon what we learned in our original Hosting WordPress Yourself series. So if you haven’t yet gone through the original, you should start there or subscribe here to get the series via email.

Why a Network Filesystem?

Let’s say a user uploads an image to the WordPress Media Library and embeds it into a blog post. Once published, traffic to the post will be distributed to the app servers via our load balancer (which we’ll be adding in the next post in this series – subscribe at the end of this post if you don’t want to miss it). The problem is that the image only exists on the server where it was originally uploaded, which will result in 404 responses when the load balancer attempts to pull the image from one of the other app servers. A network filesystem ensures that all app servers share a single location to read and write data, therefore when a file is uploaded to the Media Library it will automatically be available to all app servers.

A network filesystem isn’t the only approach when horizontally scaling your apps. You could opt to use object storage, such as Amazon S3 or Spaces. WordPress core, plugin and theme files would remain on each app server’s local filesystem, but Media Library items would be pushed to object storage. There are however two caveats when using object storage:

If you plan on managing your site via Git or using a deployment strategy, then object storage is a cost effective solution (because you don’t require additional servers) and often simpler to implement thanks to plugins such as WP Offload S3. However, in this series we’re not going to use a deployment strategy or Git so in this post I’m going to demonstrate how to configure a network filesystem. Let’s begin!

Start by creating 2 new droplets which will form your Gluster cluster 😂. They should reside in the same region as your existing servers and have ‘Private networking’ enabled so that they can communicate with each other. You can create the 2 droplets simultaneously via the Digital Ocean dashboard. 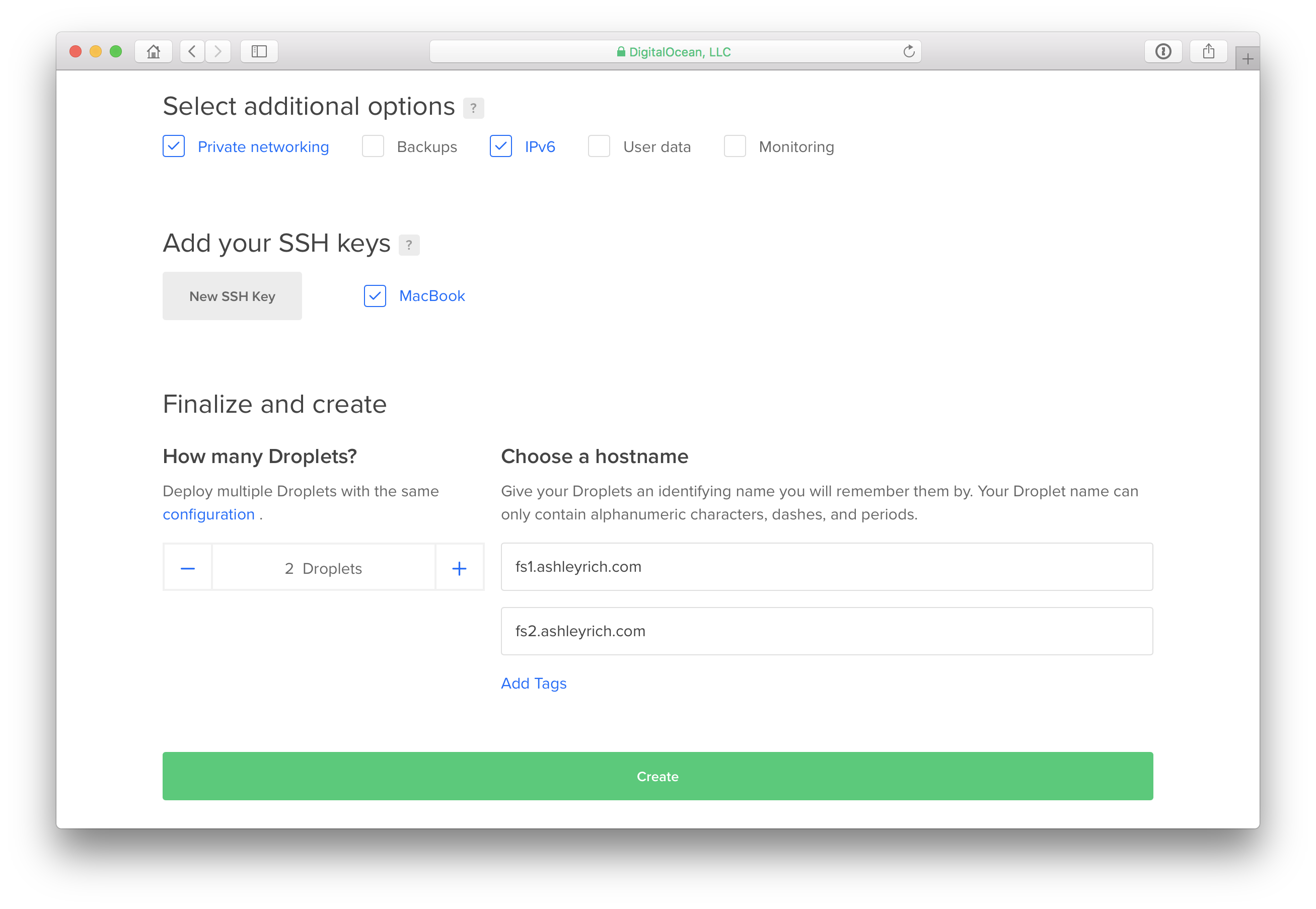 As we did in part 1 you will need to secure both servers using the steps outlined in WordPress Yourself Part 1 – Setting Up a Secure Virtual Server. However, the firewall rules should be tweaked to only allow inbound traffic for SSH.

Next, you need to add the Gluster PPA and install the Gluster server package. This should be carried out on both servers.

Once installed you can test that the servers are able to communicate using the following command (remember to substitute your server’s private IP addresses):

If both servers can probe each other, create and start a new volume. This only needs to be performed on one of your Gluster servers:

This will create a replicated volume where both servers contain a copy of every file.

It’s time to configure the existing app server to use the newly created Gluster volume. SSH into your server and add the required PPA and install the Gluster client:

Next, create a new directory where we can mount the Gluster volume. I created it under my home directory next to the existing ashleyrich.com directory.

You can now mount the volume using the private IP address of fs1.ashleyrich.com:

Copy the local files to the new Gluster volume. The -a flag will recursively copy and preserve file permissions and ownership.

You now need to tell Nginx to use the new root directory for the ashleyrich.com domain. Edit the site’s virtual host file, ensuring the access_log, error_log and root directives all to point to the new volume.

The final step is to ensure that the volume is mounted on system boot. To do that we’ll use fstab.

Add a new line to the end of the file which follows the [HOST]:/[VOLUME] /[MOUNT] glusterfs defaults,_netdev 0 0 format.

Now if you reboot the app server the volume will automatically re-mount. To test that everything is working correctly restart Nginx and reload the site. If the site doesn’t load, double-check the previous steps.

Let’s ensure that the replication features of Gluster are working correctly. Turn off fs1.ashleyrich.com and reload the site. It should continue to work as expected, because the files are still available on fs2.ashleyrich.com. But what happens when a file is created or modified? Let’s test that by creating a new temporary file in the root of the volume. This should be done from the app server (Gluster client).

Turn on fs1.ashleyrich.com and navigate to the volume root. You’ll see that the test.txt file has been created even though the server was offline during its creation. Awesome!

Now that we have a network filesystem configured here’s what our current architecture looks like: 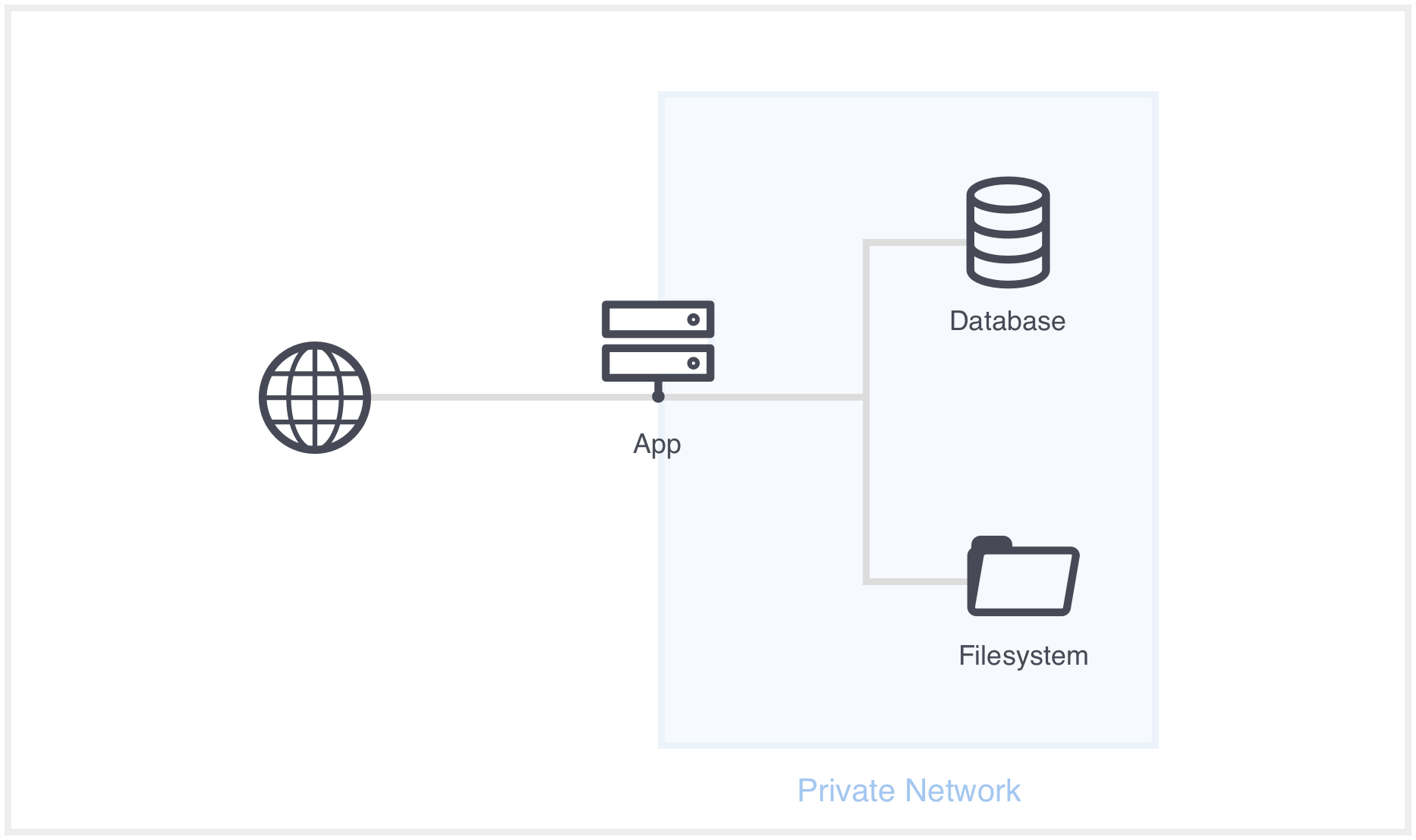 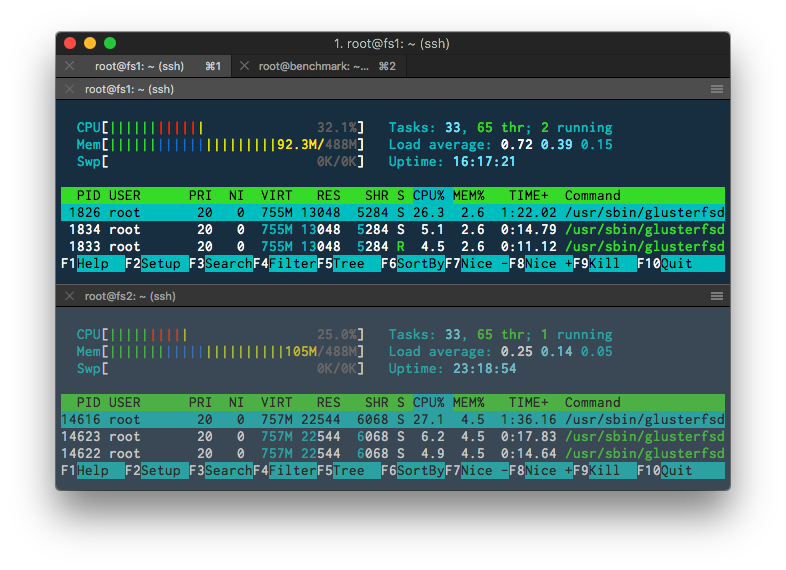 That wraps up part 2. In the next article we’ll add a load balancer and an additional app server to our infrastructure. This will reduce the CPU usage on the current single app server and allow us to handle more traffic.

Have you used a network filesystem such as Gluster before? Let us know in the comments below.