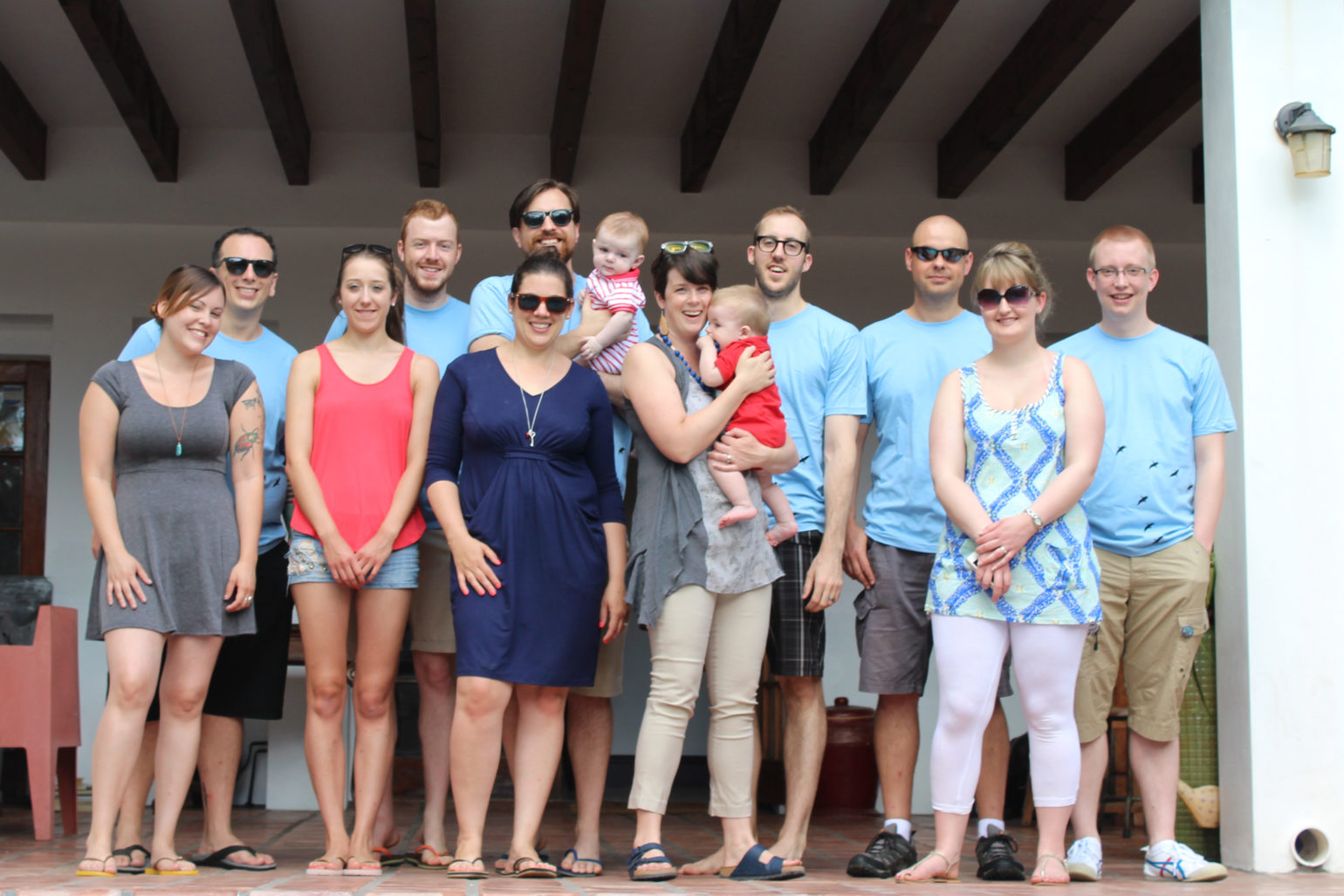 I had heard about other remote teams meeting up and how important meeting in person was for them, but I had a hard time believing that it was important for our company. I mean, not having to travel was one of the perks of the job after all. In fact, when I finally decided to give it a try and propose a retreat to the team, I figured most of them wouldn’t want to make the trip.

I had really enjoyed WordCamp Miami last year, so I proposed that we meet up around this year’s event and to my surprise everyone on the team was excited by the idea. I thought for sure that Ian wouldn’t want to do 36 hours of flying from New Zealand to Miami and that Iain wouldn’t want to make the trip from London to Miami with his 6 month old son. I figured wrong. They were pumped about it.

And so the planning began. I started looking for accommodation in Miami Beach for 11 adults and 2 infants. I ended up booking a very nice looking villa along the golf course, just a few blocks from Lincoln Road. 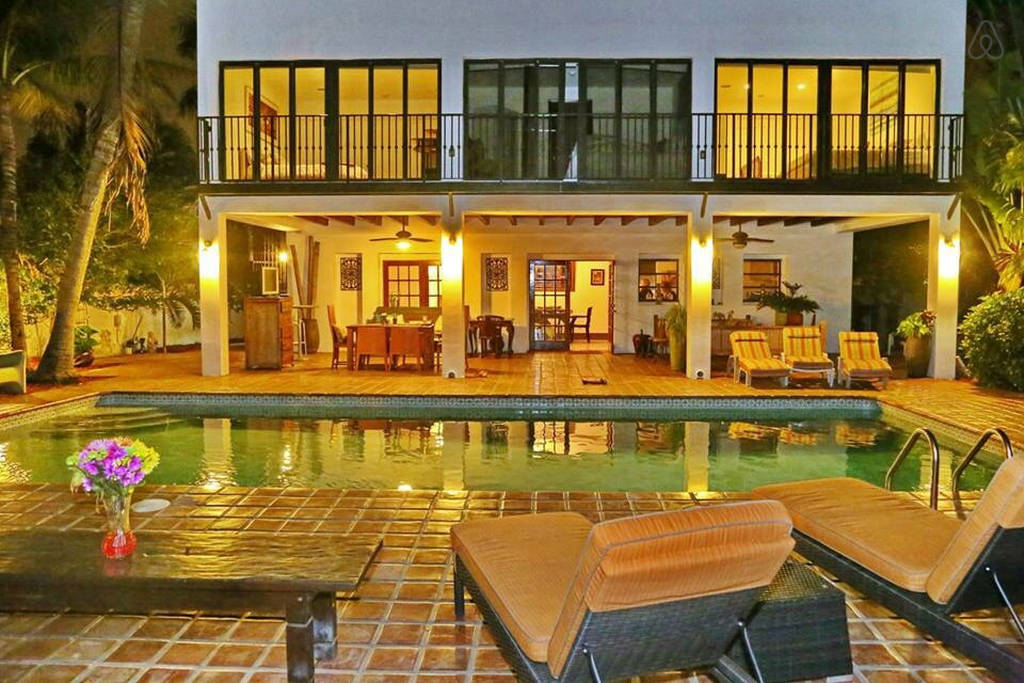 I decided we’d do Wednesday to Sunday. Some guys decided they’d make a vacation around those dates, arriving a bit before and/or staying a bit after.

I told the guys the company would cover their flights, accommodation, food, and drinks Wednesday to Sunday. It wouldn’t cover our girlfriends/wives.

And that’s about all the planning I did until 5 days before the trip, when Gilbert asked for an outline of the days. When I started putting that together I realized I had left a lot up in the air. I’m really glad Gilbert nudged me when he did. I think things went more smoothly as a result and there was less waffling on decisions than there would have been otherwise.

I put together a Google Doc with a rough schedule for each day. Here it is…

I also clarified that I wanted the guys with their heads down in their laptops as little as possible. We were about to travel far and wide and only have a little time together, so I figured our time would be better spent getting to know one another and enjoying each other’s company.

I said the villa was “nice looking” above because it didn’t turn out to be quite so polished once we arrived. In fact, I arrived to an entryway ceiling leaking water and towels on the floor. The upstairs shower was leaking and from the looks of the ceiling, it had clearly leaked before but had not been fixed.

The floors were dirty, as was the kitchen. The fridge was full of other peoples’ food. The master bedroom had dog hair on the bed and all over the floor. The master bathroom floor was dirty and had long human hairs. The rooftop terrace had dog poo that hadn’t been picked up.

To make matters worse, the pool house had not been prepared as promised. We turned on the pool house A/C in the afternoon, but it was still a sauna at 11pm. And when Ian was making the bed (it hadn’t been made) he found dried up cockroach limbs. That was the last straw. He couldn’t stay in the pool house. And unfortunately the advertised “den” in the main house was more of a hallway between the bedrooms and bathroom. Lots of traffic and no privacy. There wasn’t anywhere in the main house for him either, so I helped him arrange a hotel and taxi.

Just a few hours into our retreat and the house was a disaster. I was embarrassed and frustrated. I had booked this place. It was supposed to be awesome. Not this. Internally I was freaking out, but externally I was calm because the only thing worse would have been letting the situation ruin the trip for everyone.

The next day the home owner sent a plumber to the house, but didn’t show up herself, so I had to deal with the plumber. He ran the shower upstairs, waited a bit, no leak, left. 10 mins later there was water all over the floor. I texted the home owner and she sent the plumber back. He cut a hole in the ceiling to look at the leak and left. Finally the home owner showed up and was apologetic. She offered to hire a cleaner. A very nice cleaning lady showed up a bit later and did all the floors and the master bedroom/bathroom. She couldn’t believe they had rented us the house in that condition.

Things settled down after that. We were left to enjoy the pool and BBQ area and each other’s company. We ended up mostly sticking to the schedule.

I found it pretty overwhelming when I walked in the front door. 7 people were already there, so it was a lot to absorb at once. But it was incredible how quickly we all got comfortable with one another. We ordered pizza, had drinks, and chatted until late that first night. We all remarked about how well everyone got along and attributed it to our hiring process. If someone wasn’t a cultural fit, they just wouldn’t make it through.

On Thursday morning we had a really great chat about avoiding WordPress database merging and I’m very excited about building a product to solve that problem.

On Thursday evening the team attended the WordCamp Miami Social which we happened to be officially sponsoring. The venue was really cool. It had a little turf field and they hosted a little 3-on-3 soccer tournament. Iain, Ashley, and Gilbert put in a team that was misheard and put down as “Delisious PRIME”. Especially ironic since we were the event sponsor. 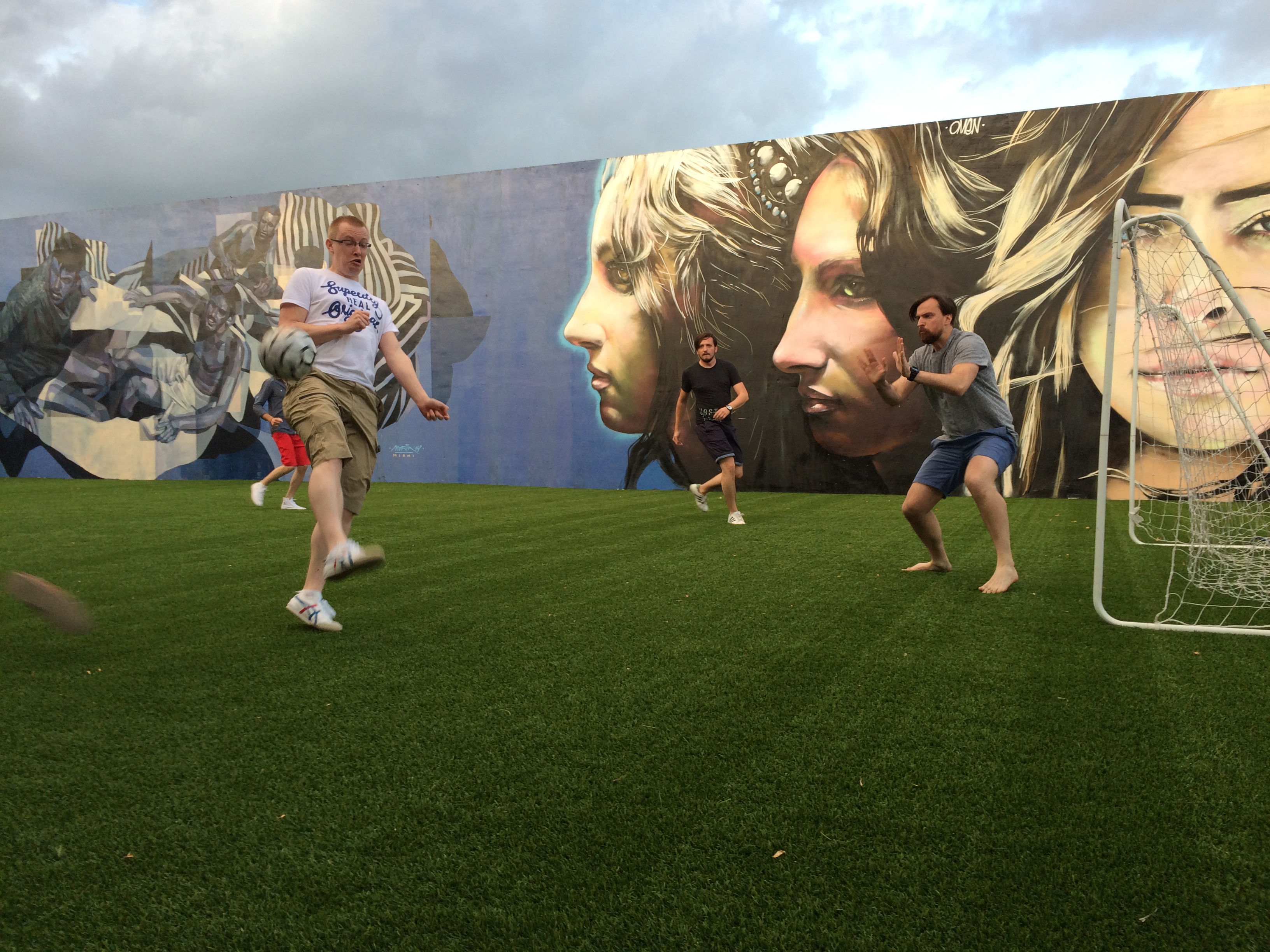 Friday we spent the day at the house, chatting, BBQ’ing, having drinks, and playing in the pool…

That night, we all went out to Rosa Mexicano for dinner. Good food, good people, good times.

On Saturday, it was great to catch up with old friends and make a few new ones at WordCamp Miami. We gave out all 44 of our WP Migrate DB Pro t-shirts. I think they turned out pretty good… 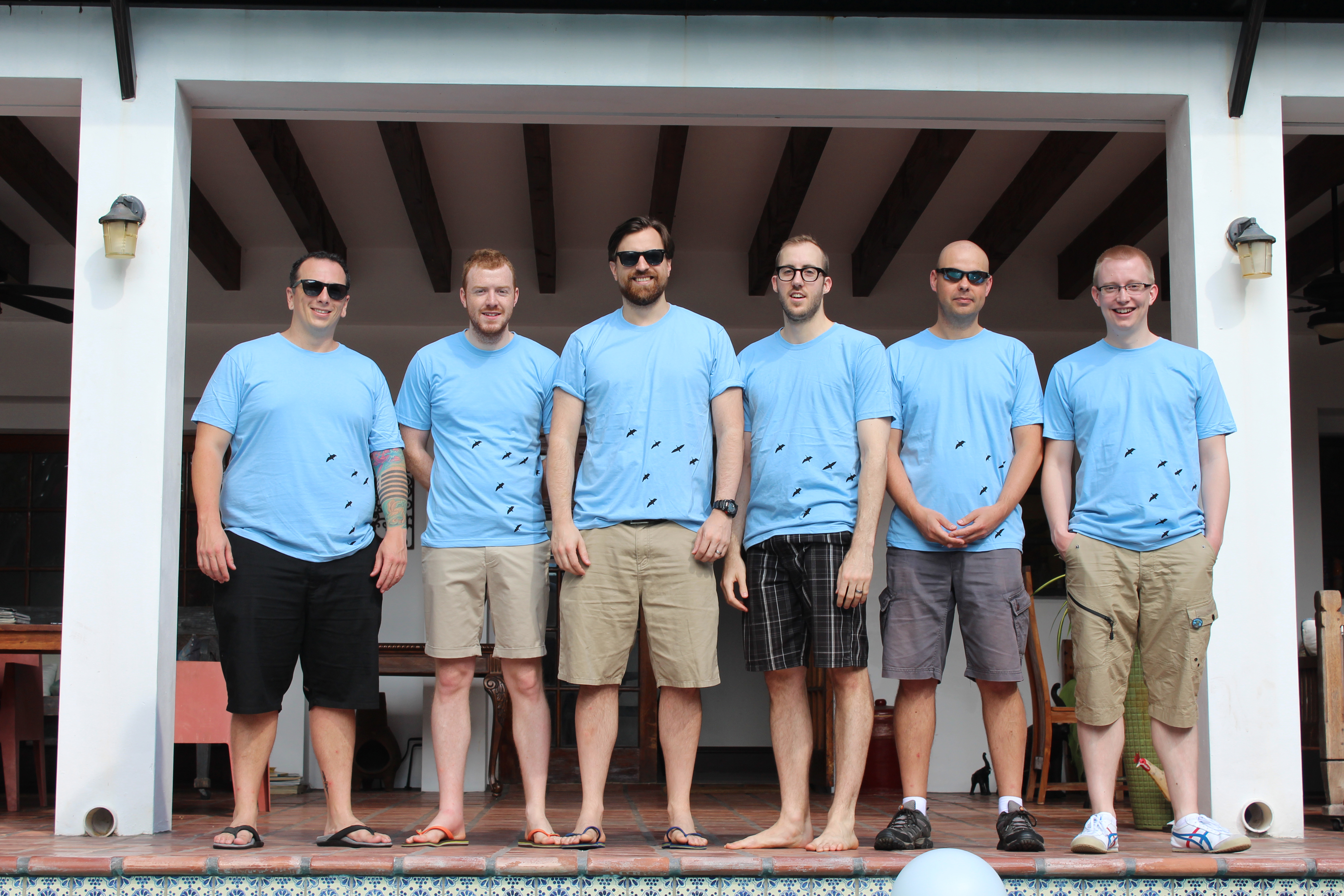 That night we went to Texas de Brazil and had some incredible steak. I heard one of the guys say it was the best steak he’d ever had. Me too. Carl and Alex from Rocketgenius (Gravity Forms) joined us as well and took care of the bill (thanks guys!).

Probably the talk that stuck out the most for me was Modernizing WordPress Search with Elasticsearch by Taylor Lovett. It was really interesting to hear how the ElasticPress plugin works and how it offloads queries to Elasticsearch. It really got my wheels turning about how we could offer something like this as part of our AWS suite of plugins.

I enjoyed this WordCamp Miami, but thought last year’s venue was a lot better. Having all the rooms in one spot connected by one hallway made the hallway track stellar last year.

Sunday was pretty much breakfast and then off to the airport. I had booked a flight in the evening so we could attend day 2 of WordCamp Miami, but unfortunately my flight was rescheduled to noon. The others who were sticking around Miami had to deal with checkout and getting to another hotel, so they didn’t make it to day 2 either.

Baremetrics revealed costs in a post about their company retreat, so I thought it might be interesting to tally up our costs to compare…

I expected the trip to cost between $10k and $20k, so this was right near the middle of that.

For our next retreat, there are a few things I would do differently.

I found the trip too short. Some of our significant others (my wife included) couldn’t afford the time off work/school. Next time I’d like to go for a little longer if we can make it work.

If my wife makes the trip again, we’ll probably leave our son with his grandparents and make it a “real” vacation.

I’d also like to do some kind of activity or two next time. We had discussed going to the beach and renting paddle boards on Friday, but after a big lunch, ambition faded and we just hung out at the house.

Doing the meet up around a conference was a good idea, but we were all in agreement that a more developer focused conference like LoopConf would be better. We could probably find something to do in Vegas for a few days before the conference too. 😛

Obviously the house was the biggest problem, but I think it was just bad luck. All the AirBnB reviews were excellent. The host was very quick to respond to my messages before our trip. There weren’t really any red flags until we arrived. I’ve used AirBnB and HomeAway to book a house for a group a few times now and never had a problem, so this was an outlier.

Also, be sure to check out Gilbert’s review of his trip.