WP Migrate DB Pro had its third birthday just over a week ago. Yep, 3 years since the first release! Since it’s launch, WP Migrate DB Pro’s UI has been pretty much the same. But today with the release of version 1.6, it’s getting some shiny new updates and features. You could say it’s growing up a little. Let’s take a look…

Right away you’ll notice that the progress bars animate much more smoothly and that the new UI contains a lot more information. We’ve added tabs to show the multiple stages (backup, database migration, media files migration) to be completed and indicate which stage is currently running. We’ve also added the quantity (bytes) of data to be backed up, migrated, copied, etc. And when it’s a database backup or migration, we show how many tables have been backed up and how many to go.

We’ve moved the “Pause before replacing migrated tables” option into the modal so you can choose to enable it anytime before the migration completes. We actually snuck that feature into the Advanced Options panel in version 1.5.3.

You’ll also notice there’s a new “Show Tables” link, what could that be? 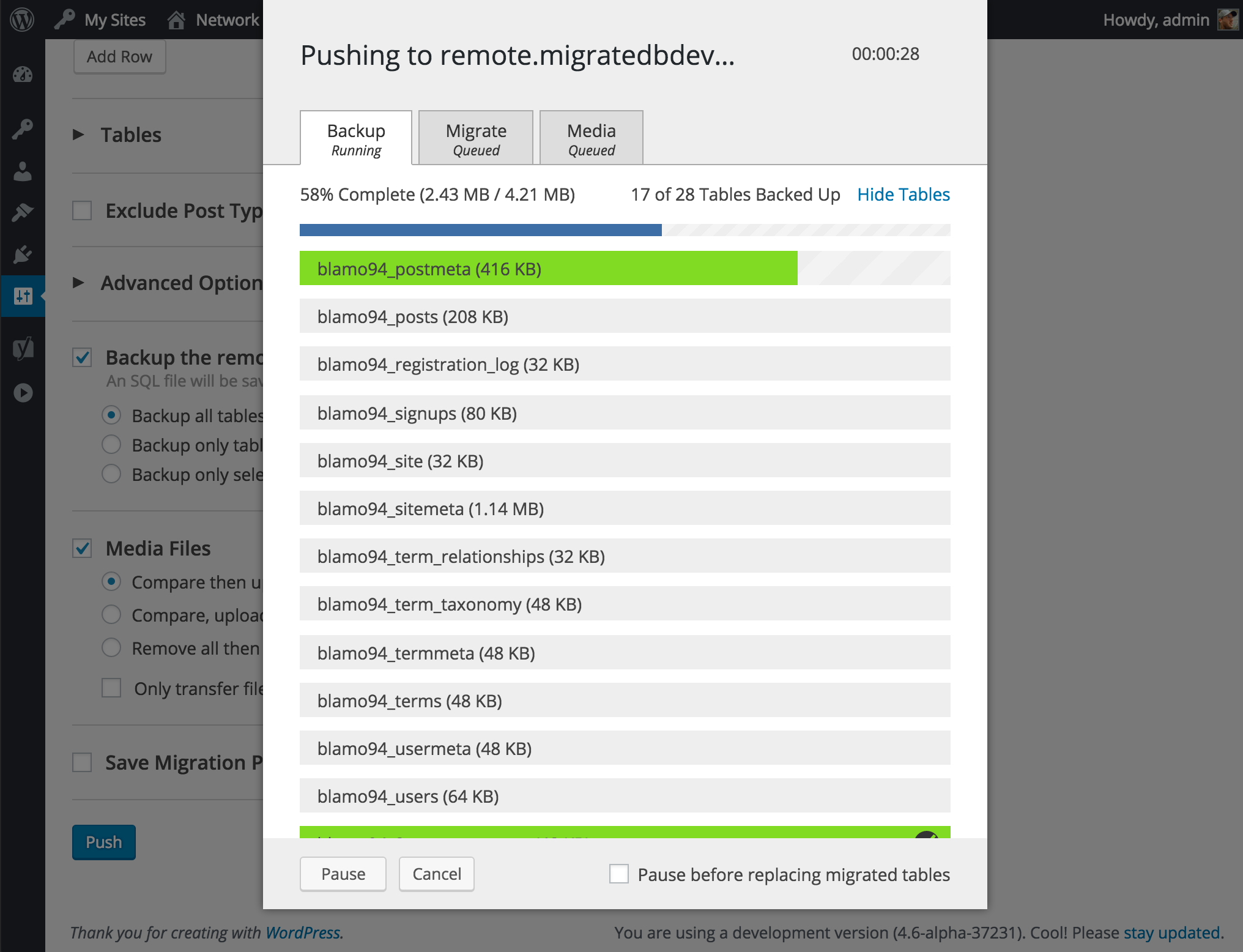 Clicking on “Show Tables” will grow the modal down and reveal a list of tables with their sizes. When a table has completed, it is moved down to the end of the list so that the table in progress and the next ones up always shows at the top.

The code behind the old progress UI was pretty nasty. jQuery nested nests of nests. Jeff threw almost all of it out and coded the new UI in Backbone. Screenshots are great and all, but let’s see this sucker in action… 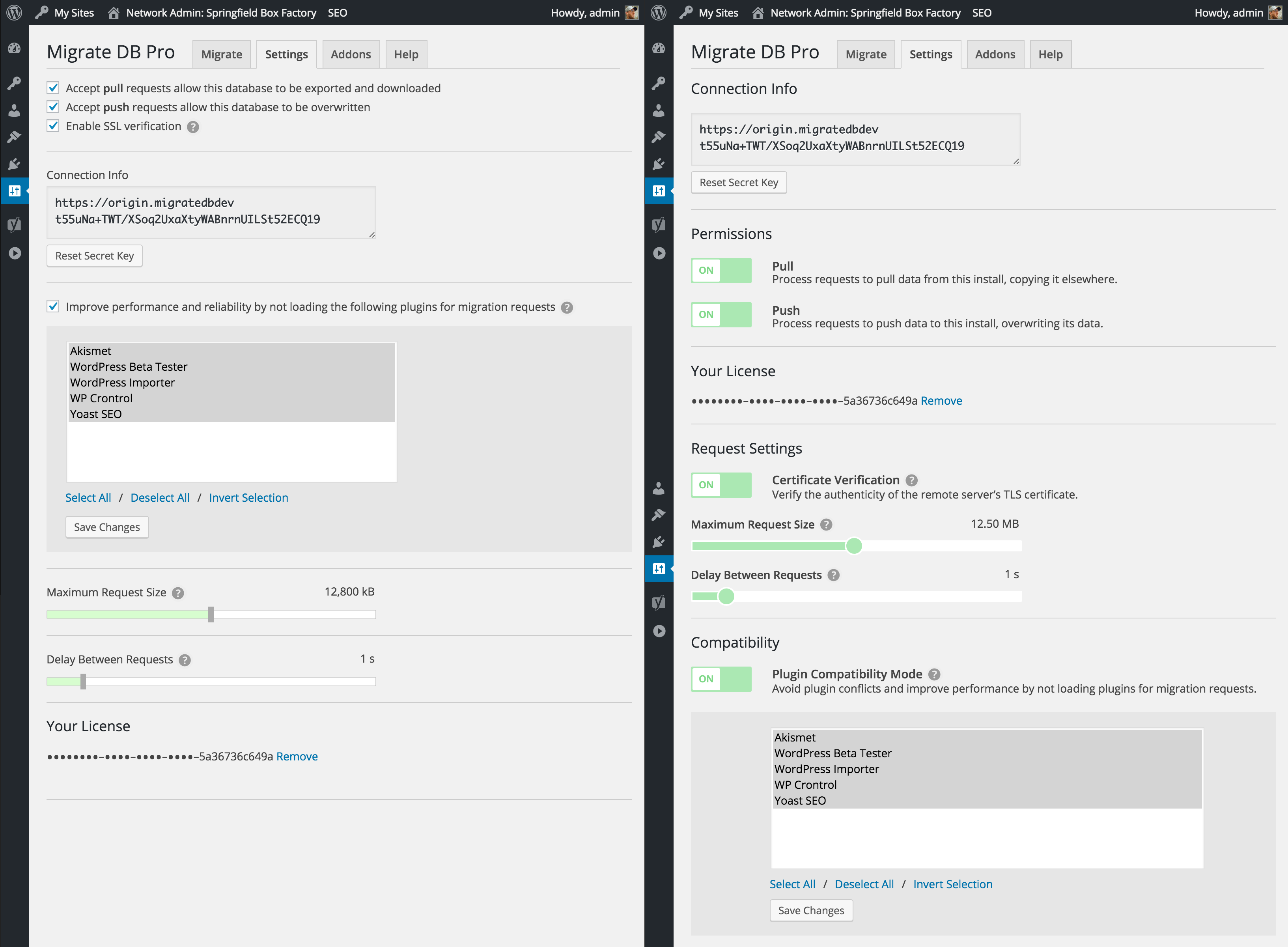 The Settings tab was due for a major overhaul. As we added new settings, we just chucked them into the Settings tab without too much thought. After 3 years of this, it was a bit of a mess. It was time to think about how it should be.

The Connection Info was moved to the very top as it is the most commonly accessed item on the Settings tab. We also moved the License section up so it’s easier to access.

All of the check boxes have been converted to more usable on/off switches, just like WP Offload S3. We’ve made the slider controls better, with larger handles so they’re easier to grip, and units now round to even numbers. Previously, the slider would give numbers like 3,752 kB and 19,238 kB. Now you get 3.75 MB and 19.00 MB. Those who consider themselves a bit OCD rejoice!

There was quite a bit of confusion around the “Enable SSL verification” option. Most people just assumed it was to turn SSL on/off for the Connection Info. Few bothered to click the little question mark to read the description. So we’ve moved the whole thing further away from the Connection Info into a new “Request Settings” section, changed the title to “Certificate Verification” and gave it a little tagline that’s always visible. Hopefully removing any mention of “SSL” will help make this more clear.

In the past, when a license was activated for the very first time on the very first site, a brief message was displayed to confirm that activation was successful. This was the same brief success message as every other activation. We wanted to do something a little special for first activations, so now we show this friendly greeting with some helpful links to our documentation and videos and pointing out the Help tab.

Although the UI updates made for the bulk of the work in this release, there were a few minor changes and I suggest checking out the changelog for the full list.

I’m happy to report that version 1.7 is already underway. One thing we’re addressing is recovering gracefully from errors. For example, if one of your migration requests fail, instead of the entire migration coming to a halt, we’ll retry automatically after a few seconds. If a few automatic retries fail, we’ll just pause the migration and allow you to resume later, picking up where the migration stopped. We’ve all experienced the frustration of running a migration for over an hour only to have it fail due to a network timeout or something else that should be recoverable. With this feature in place, you shouldn’t have to hold your breath when you run a large migration, praying that it completes.

Matt and Jeff did an awesome job coding this release and testing the crap out of it, so if you’re jazzed about the new UIs be sure to thank them in the comments below!