For the last couple of years, I’ve published a “year in review” post on my personal blog. (In fact, that’s all I’ve published on my blog in the past two years. But it’s not like I didn’t write. In 2016, I wrote 10 articles for the Delicious Brains blog, 1 for the Better Search Replace blog, and recorded 21 episodes of Apply Filters. So there!)

Anyways, instead of publishing about me to my personal blog that only my mom reads, I’ve decided to write about Delicious Brains here instead.

In January, we acquired the Better Search Replace plugin from Matt Shaw and he joined our team to continue maintaining it and work on WP Migrate DB Pro. Later in the year, we welcomed Peter Tasker and Ian McFarlan to the team and reorganized into the following product teams:

Yes, we have two Ian’s and an Iain and it’s not confusing at all. 🙄 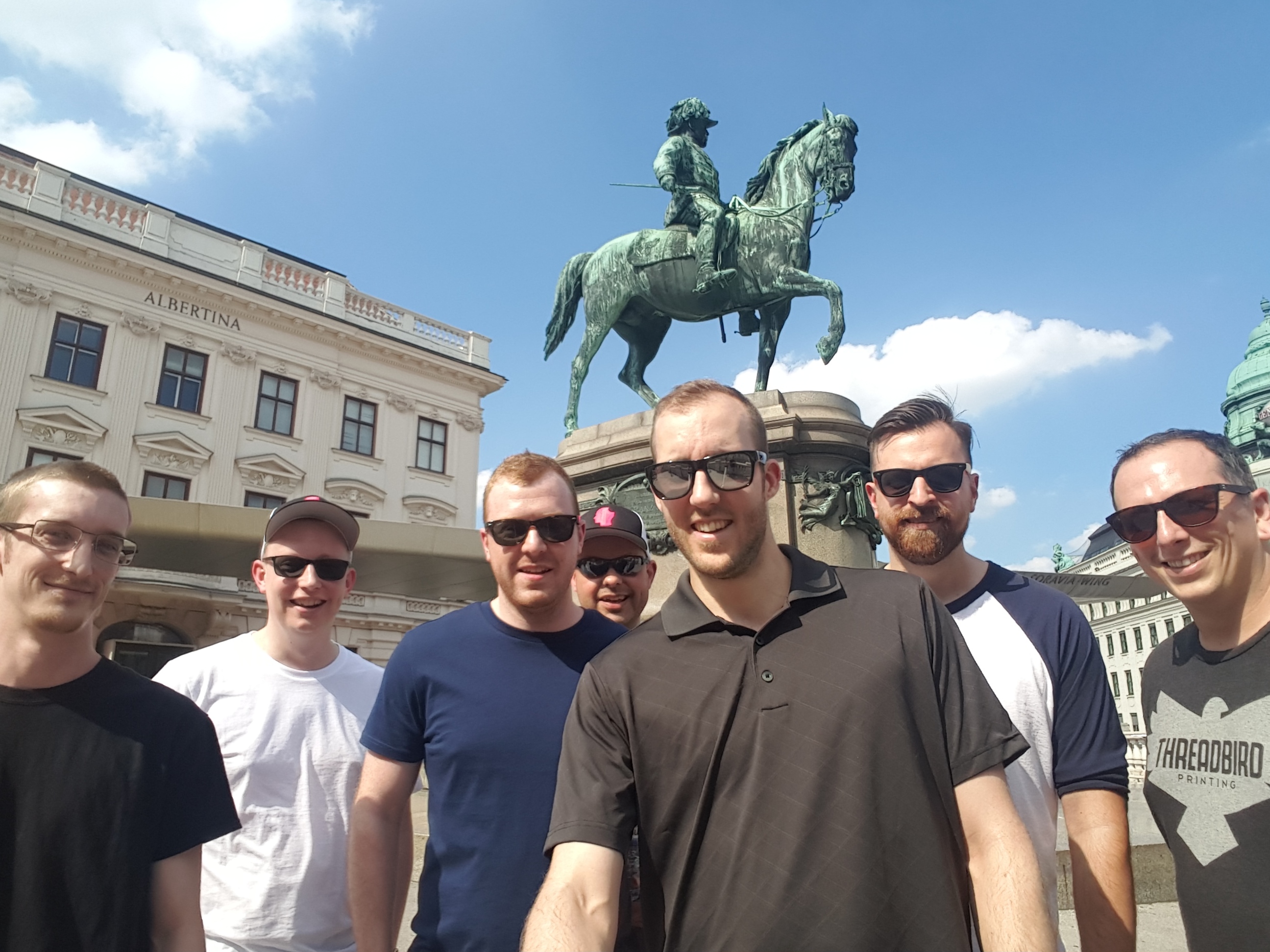 In June, our team met in Vienna for our second annual company retreat. The trip was just about perfect, I don’t think I’d change a thing.

As an experiment, we also did two regional retreats about six months after the company retreat. In November, the team members based in the UK met up in Edinburgh and I joined them. And in December I joined the American and Canadian members of the team in Philadelphia for WordCamp US. The regional meet-ups were fun, but I’m still undecided if they’re the best way to go.

We didn’t push our products forward as much as I’d like in 2016, but we made some adjustments to our release planning halfway through the year that has already proven to be effective in helping us push out releases more often. Instead of just chucking a bunch of GitHub issues into a milestone and working on them to completion (or until we arbitrarily decide to punt them to the next release), we choose 1 focus feature for a release and once it’s complete, we stop working on everything else, test, and cut the release. It should be very interesting to see how well this works going forward.

In the first half of the year I recognized that we had to do something about release testing. It was taking a week to test a release, a week our developers could have been working on the product. Not to mention that no one on the team enjoys testing (well, maybe Jonesy?).

At a conference in May, I talked to a Quality Assurance (QA) professional and she recommended we bring on a QA person and sent me a recommendation. I figured we’d give it a try. The QA person we hired dragged their feet and we ended up testing a release by ourselves as usual. As we were gearing up to try again with the next release I came across a talk by Trish Khoo (Engineering Manager at Google) titled Rock Solid Software Testing Without Hiring an Army. This is exactly what we needed. It gave us confidence that automated testing was the correct path.

We ditched the idea of building a QA team and dedicated one of our team members (Jonesy) to building automated acceptance tests. At this point the framework is built and set up for WP Offload S3 and a good chunk of WP Offload S3’s manual tests have been automated. Jonesy will be switching over to set up a similar framework for WP Migrate DB Pro, build out a few tests there, and get the WP Migrate DB Pro team rolling with acceptance tests.

At the very end of the year, we also launched Mergebot into beta. There’s only been a bit of feedback so far, but it seems like we have our priorities in the correct order and we’ll be pushing forward with that work making it better for our beta customers and eventually launching. I’m looking forward to reaching out to our beta customers and hearing how things are going as we make improvements. There’s still lots of work to be done here, so I don’t expect us to be launching Mergebot in the first couple of months of 2017. 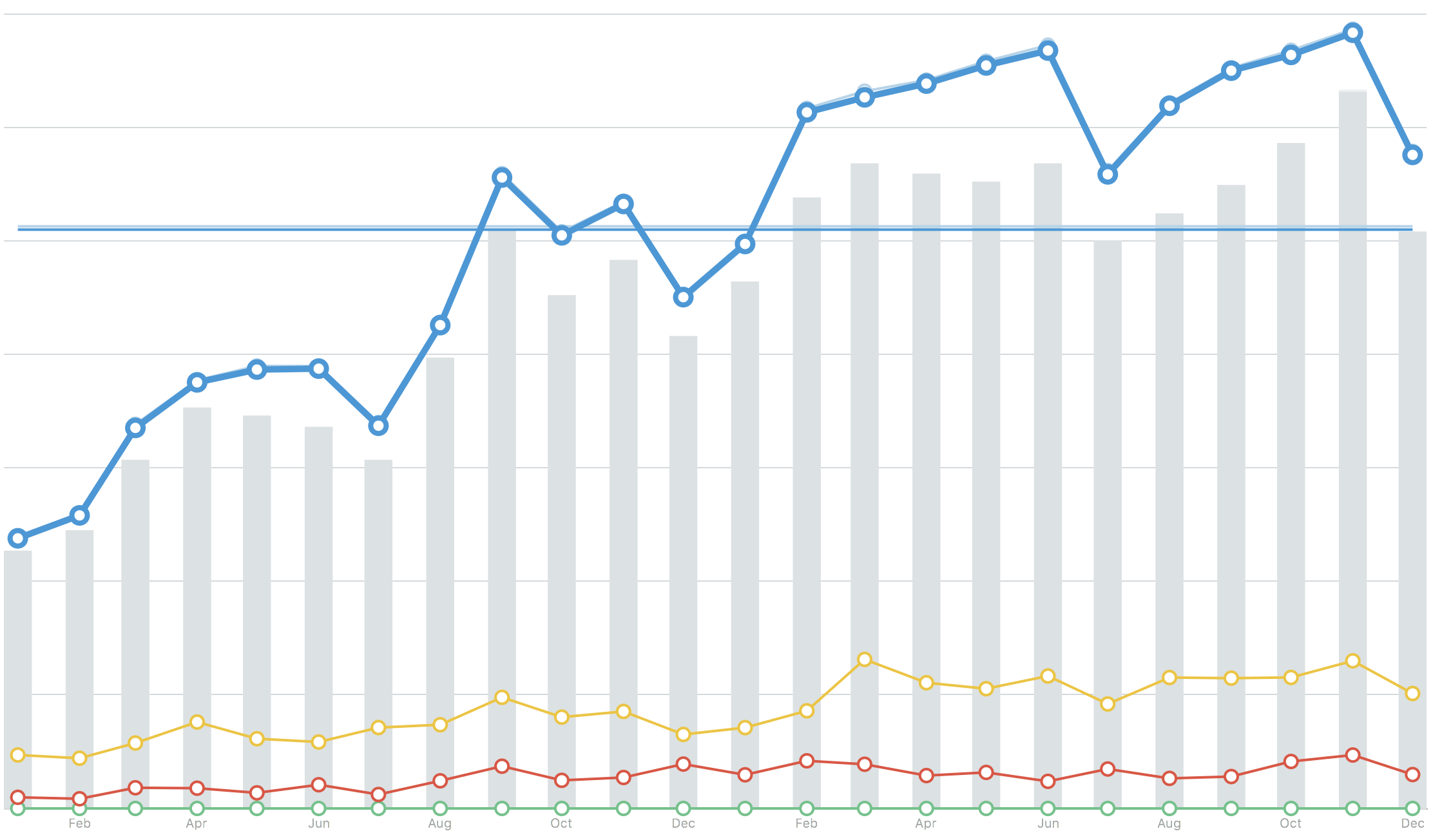 We experienced healthy growth again this past year. Revenue was up 59% which allowed us to continue growing our team and invest in our new product, Mergebot. It’s not the 81% increase we saw the year before, but we launched a new product (WP Offload S3) that year that added a solid chunk of revenue to our top line.

As a solo founder, it’s important that I get out and mingle with other entrepreneurs to learn from them and get help working through challenges that I face. I attended three conferences in 2016 with that purpose in mind. 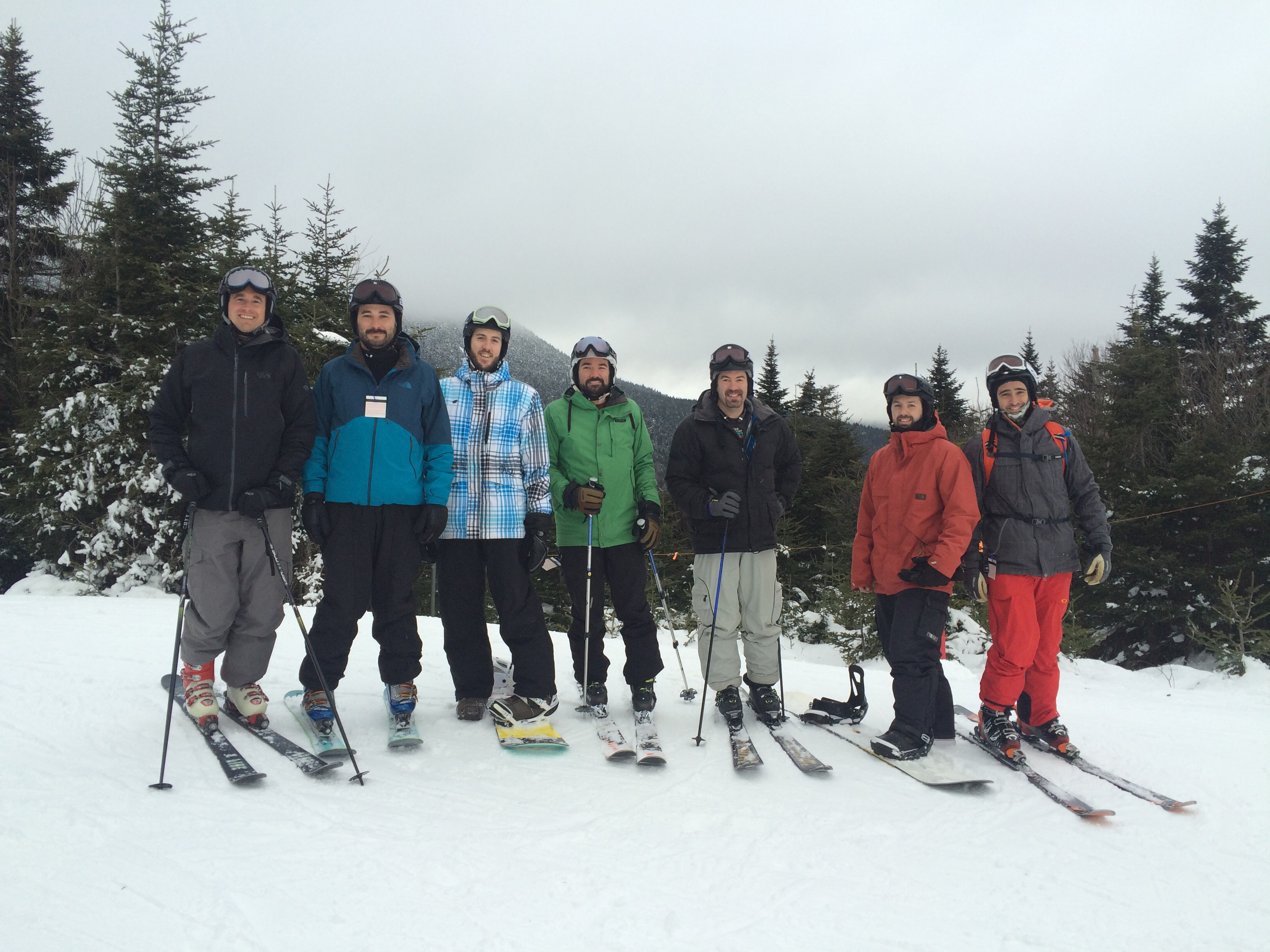 I started with Big Snow Tiny Conf (BSTC) in Vermont. BSTC is a conference I founded and run with Brian Casel. It’s for web business owners to come together to share knowledge, get business advice, and of course do some skiing/snowboarding. 2016 was our third annual event, we had a full house (12 people) and it went very well. The conditions weren’t the best (no powder, a little rain), but we still had a great time on the slopes. It was great to meet some new folks and chat about their businesses as well as catch up with returning attendees.

There was also a BSTC West last year in Beaver Creek, Colorado run by Dave Rodenbaugh. I didn’t make it but I heard it was a great time as well. For 2017, Brian and I are running Vermont again, Dave’r is running Colorado again, and Craig Hewitt (Podcast Motor) is running a new event: BSTC Europe in Chamonix, France! I’m not going to make this one, but I hope to in 2018.

In March I flew to Phoenix for my third run at PressNomics. It was a great time, you should buy a ticket to PressNomics 5.

Unfortunately I missed MicroConf in April (I had booked a trip to Costa Rica with my wife before the dates were announced) so instead I flew down to Philadelphia in May for my first BaconBiz Conf. And as I suspected, it was similar to MicroConf. I ended up coming home with a notebook full of actionable notes from the high quality talks. It was a much smaller event (only 65 attendees) but the caliber of the attendees was very impressive.

The deliciousbrains.com site was a source of frustration this year. Although we did finally implement automatic renewals with the help of a freelancer, the redesign of our site has been a disaster and I’m to blame.

I kicked off the redesign project in December 2014 (yes, 2014 is right). I hired a freelance designer and they delivered the mockups by the end of February. Then a frontend developer I hired transformed the mockups into responsive HTML/CSS/JavaScript by the end of April. Then it was up to me to integrate it into our existing code and I dropped the ball. Iain and I are the only members of our team who have worked on our site and we were both busy with other things and just couldn’t prioritize the redesign. We did make some progress here and there but at the moment there’s still quite a lot of work to do.

Part of the problem is that the frontend coding was not up to our standards and there are a lot of little things that have ended up being a lot of work to fix (e.g. a little padding in a slider that shouldn’t be there turned into replacing the whole slider, grrrr). Another part of the problem is that there’s a lot of content that needs to be produced (e.g. videos, screenshots, copy, etc) to fill in the designer’s placeholders. And often the placeholders didn’t capture all possible sizes and shapes of the content and when we put real content in there, new problems arise. It feels like it’s been a “1 step forward, 3 steps back” process.

In future redesigns and site development, I’m going to insist on getting all the content done up-front before and during the design phase and make sure all the content is ready to go before getting into coding. I’m also going to try treating our site like another one of our products going forward and dedicate more of our team to working on it.

I didn’t have very good luck with outsourcing in 2016. I was happy with the designer and continue to work with him, but I was disappointed with all the freelance developers who worked on our site. Plus there was another freelance developer who agreed to a start date to work on our site and four weeks after that date they hadn’t written a line of code. Frustrating. Then there was the QA guy. It could be that my expectations are too high, but I don’t think so.

I listened to a few audiobooks on business this year but the two books that were remarkable were:

You can check out all the other books I plan to listen to on my Goodreads shelf.

I met most of these goals. I definitely did get lots of project management tasks off my plate by breaking the whole team into product teams and giving them the leeway to manage themselves. I also documented and offloaded some weekly tasks to my assistant.

We also managed to launch Mergebot (albeit as a beta), grow revenue (not quite double) and grew the team by exactly three more members. I decided we wouldn’t work on WP Offload SES at all because it would have stretched us too thin. And I didn’t take any steps to hire for a non-developer role at all, though in retrospect I wish I had.

I’m really proud of the team and what we’ve accomplished this past year together and I’m very excited about what we have planned for 2017. I predict another great year ahead! 🙂

What would you like to see from us in 2017? Let us know in the comments below.

This entry was tagged Business, Year in Review.