Today is release day for WP Offload S3 and with it comes some new features and some changes.

The free edition of the plugin has been renamed to “WP Offload S3 Lite” and is now at version 1.0. The commercial plugin is now called “WP Offload S3” and is a standalone plugin at version 1.1, built on top of the free plugin. You will no longer need to run the plugins together and they actually enforce that by deactivating themselves when necessary.

Reorganizing the plugins in this way brings WP Offload S3 in line with the approach we use for WP Migrate DB Pro. First, we rigorously test the free edition. When it passes all our tests, we release it. If users report any issues we immediately do a patch release. In parallel we test the paid edition and when it passes all our tests, we release it, usually about a week after the free edition. This means that our customers get the benefit of an extra round of testing and a good portion of the code in use out in the wild before they use it on their site.

We’ve listened to the feedback we’ve received since launch and have decided to change how the license usage is calculated. It is now based on the number of items offloaded to S3 rather than total attachments in the Media Library. This is a fairer and less confusing approach for customers.

We have also included a new tool to detect all the missing files from your server and download them from S3. It can take care of replacing S3 URLs with local ones after the download has happened. This tool also brought about a redesign of the sidebar which now incorporates the tool for uploading existing attachments to S3: 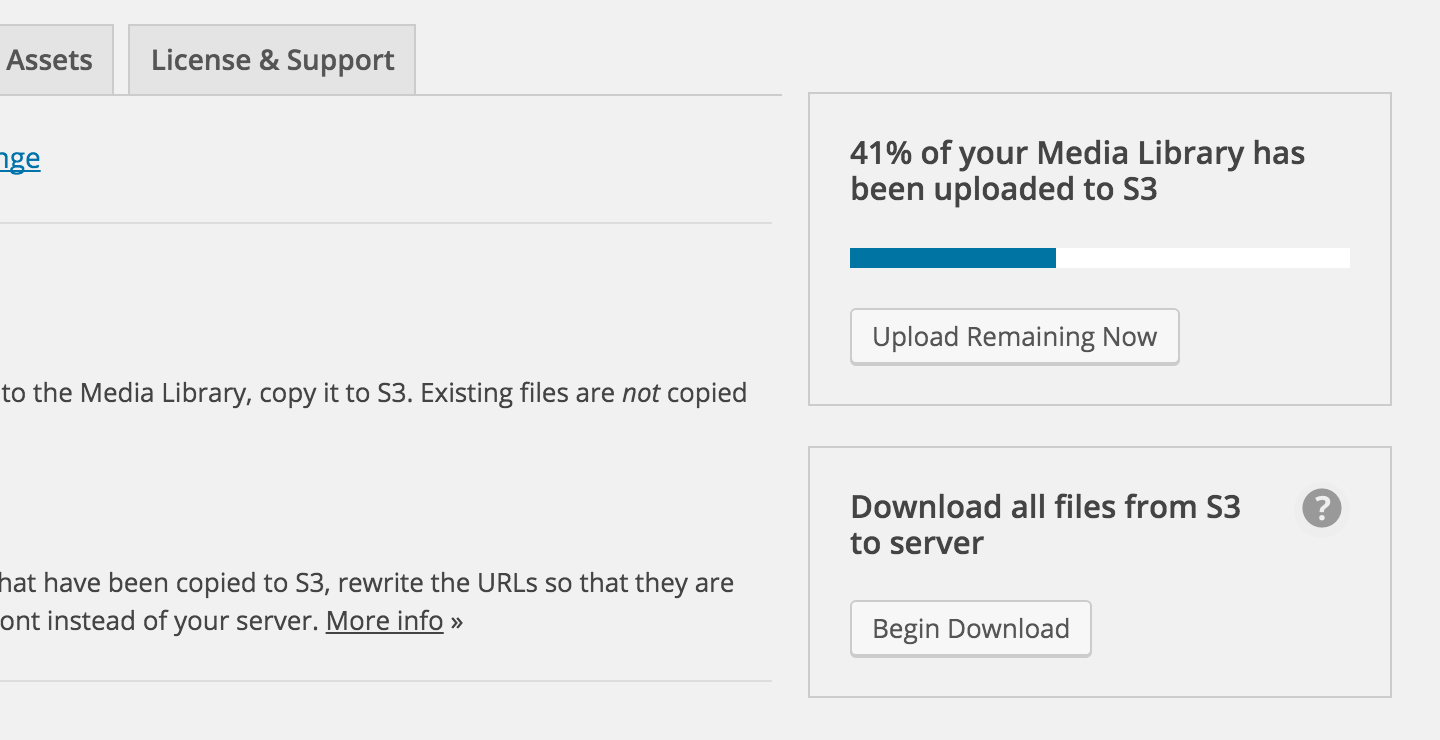 We’ve come across a number of use cases where other plugins that use files offloaded to S3 need the files to be set as private. So we’ve introduced a new handy toggle link when viewing an attachment’s details:

We have introduced the ability to define any and all of the plugin’s settings via a constant. When a setting is defined in the code, it locks that setting from being changed in the UI. This is true for the Assets addon settings as well.

The ability to define settings in code gives developers further control over the configuration of their sites. For example, adding the below code to your wp-config.php would control the some of the advanced settings:

The ‘Advanced Options’ section on the settings page would then look like this:

See our doc for complete details on how to use the constant.

The new version also brings a simplified interface for the ‘Domain’ setting which controlled the format of the S3 URLs.

You will also notice a peppering of handy ‘Read More’ links through the settings page which point to our documentation to help understand each setting.

As part of this release we have a new addon which integrates with the Advanced Custom Fields Image Crop plugin. This allows you to crop images that have been offloaded to S3 but removed from the server without any issues.

We have also released new versions of the Assets addon and the Enable Media Replace addon to address a number of bug fixes and improvements, as well as releases to all other addons for compatibility with WP Offload S3 1.1.