Back in June, our team got together for our fifth annual retreat. After a couple years of not basing retreats around a conference, the team decided to give the conference-based retreat format another go. We met up in Berlin for our retreat and WordCamp Europe.

Meeting up in person gives us the chance to talk about ways to improve our existing products and discuss ideas for new products (SpinupWP, the modern server control panel that we recently launched, was initially conjured up at a retreat in Nova Scotia). It isn’t out of the norm for an impromptu brainstorming session to erupt at dinner. We also get to know each other better through retreats, which in turn makes it even easier to work together and ultimately provide better support for our customers.

It sounded like last year’s retreat in Negril, Jamaica was absolutely stunning and great quality time with the team but Berlin would provide the opportunity to network with other developers as well.

This was my (Caillie) first retreat since joining the Delicious Brains team back in August so I had a few butterflies to meet the team, go to my first WordCamp AND to Europe for the first time.

It was everyone on the team’s first time in Berlin, so we were all exploring with fresh eyes.

Gilbert put together a video of our time in Berlin:

We didn’t hire an event planner this time as we have in the past. Brad did all the planning, he booked the accommodation and made the schedule. He even hired a private chef for certain meals so we could focus on what we went there to do; hang out as a team and work.

He continuously added to our schedule in a Google doc so it was always clear to the team what to expect. Here was the plan for the week:

We didn’t have much planned for Sunday as we weren’t sure how late Saturday night would be. This is what we wound up doing:

[Varying times] – The team all left on their respective flights happy to see each other but sad to go another year apart.

We generally stuck to the schedule with a few substitutions here and there. There was some downtime intentionally built into the schedule so we could go with the flow and take suggestions when we got there.

The days felt like they were balanced well between work, activities and downtime. Personally, I was happy to get to spend time with the team before the conference so I think scheduling our retreat to be heavier at the beginning of the week was a good idea.

We stayed at the Berlin Base Apartments in the Kreuzberg neighborhood.

We booked three apartments, sleeping one to four people in each. The view from the rooftop patio was beautiful at any time of day though I especially loved it at sunset 😍

The apartments were lovely and we had a great experience. In contrast to last year, the internet was very reliable which removed the stress of not being able to keep up with support.

A personal highlight was meeting the team in person for the first time. Having video meetings and communicating via chat certainly helps bridge the gap as a remote team but I felt I got to know the team much better spending time face-to-face. The team was extremely welcoming, I felt comfortable from the get-go. 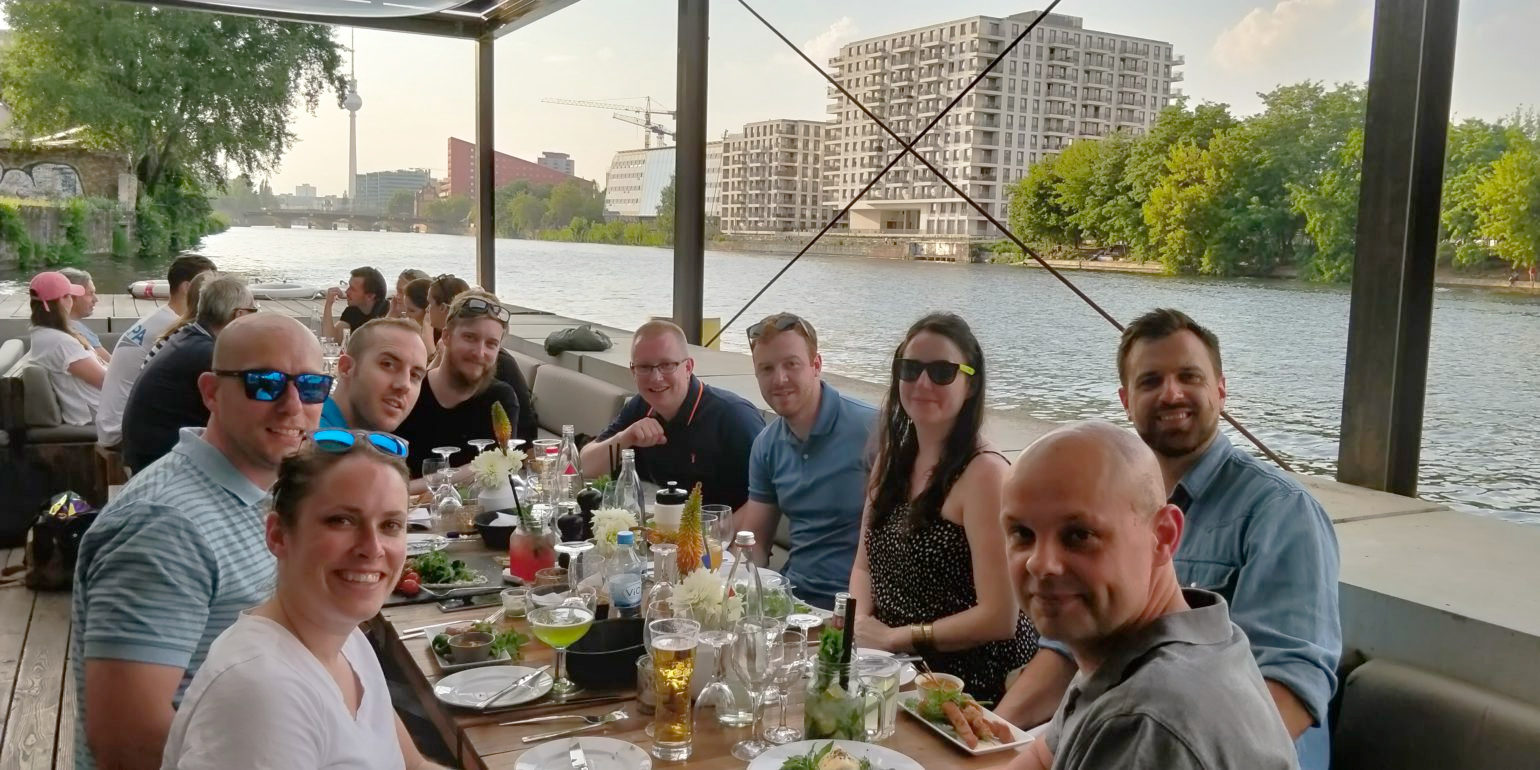 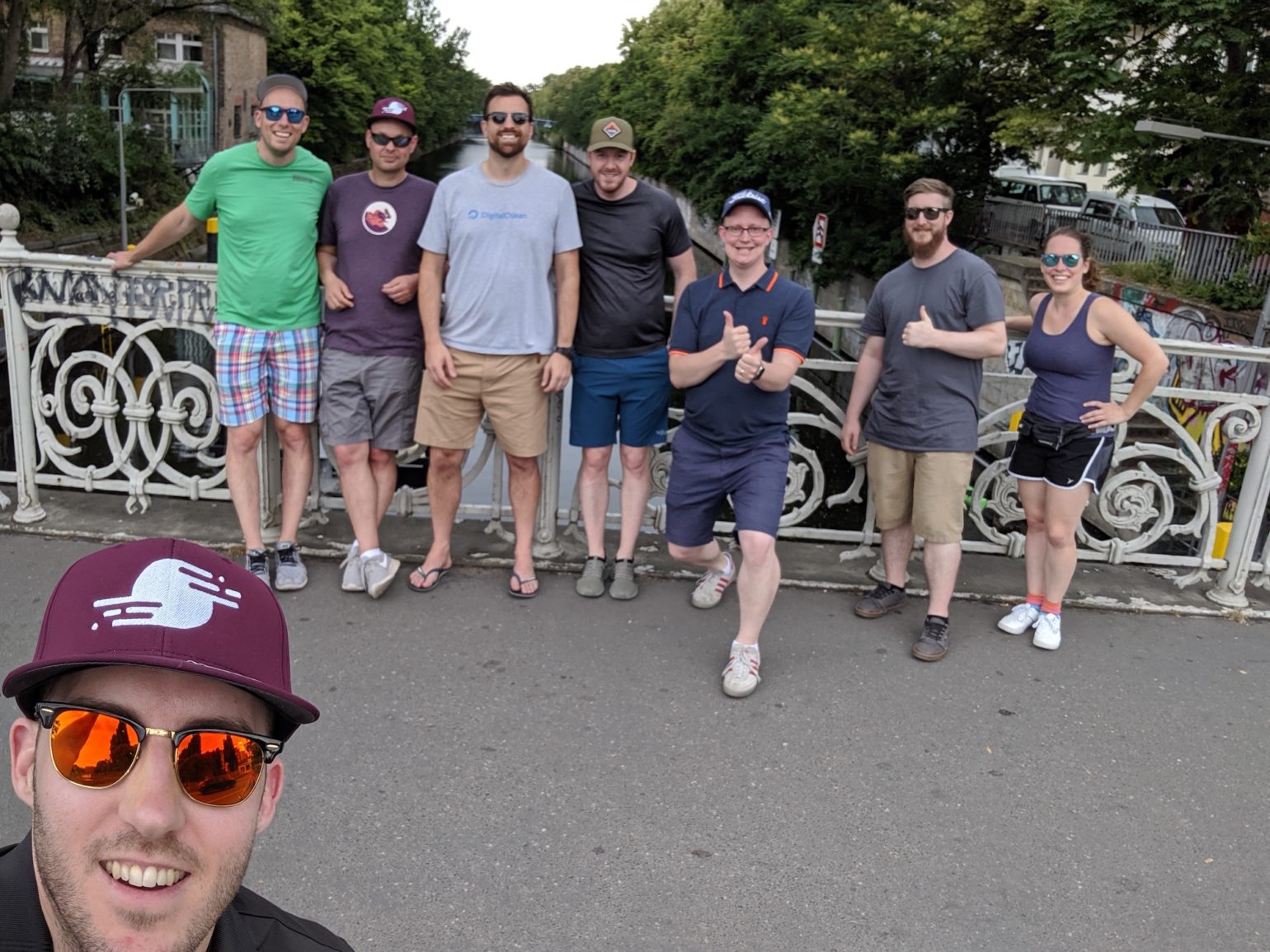 Seeing Berlin was another highlight. We got a good overview of the city on our four-hour walking tour. We saw how the neighborhoods differ so much from one to the next. The city is beaming with character and a place you’ll never run out of things to do and explore. 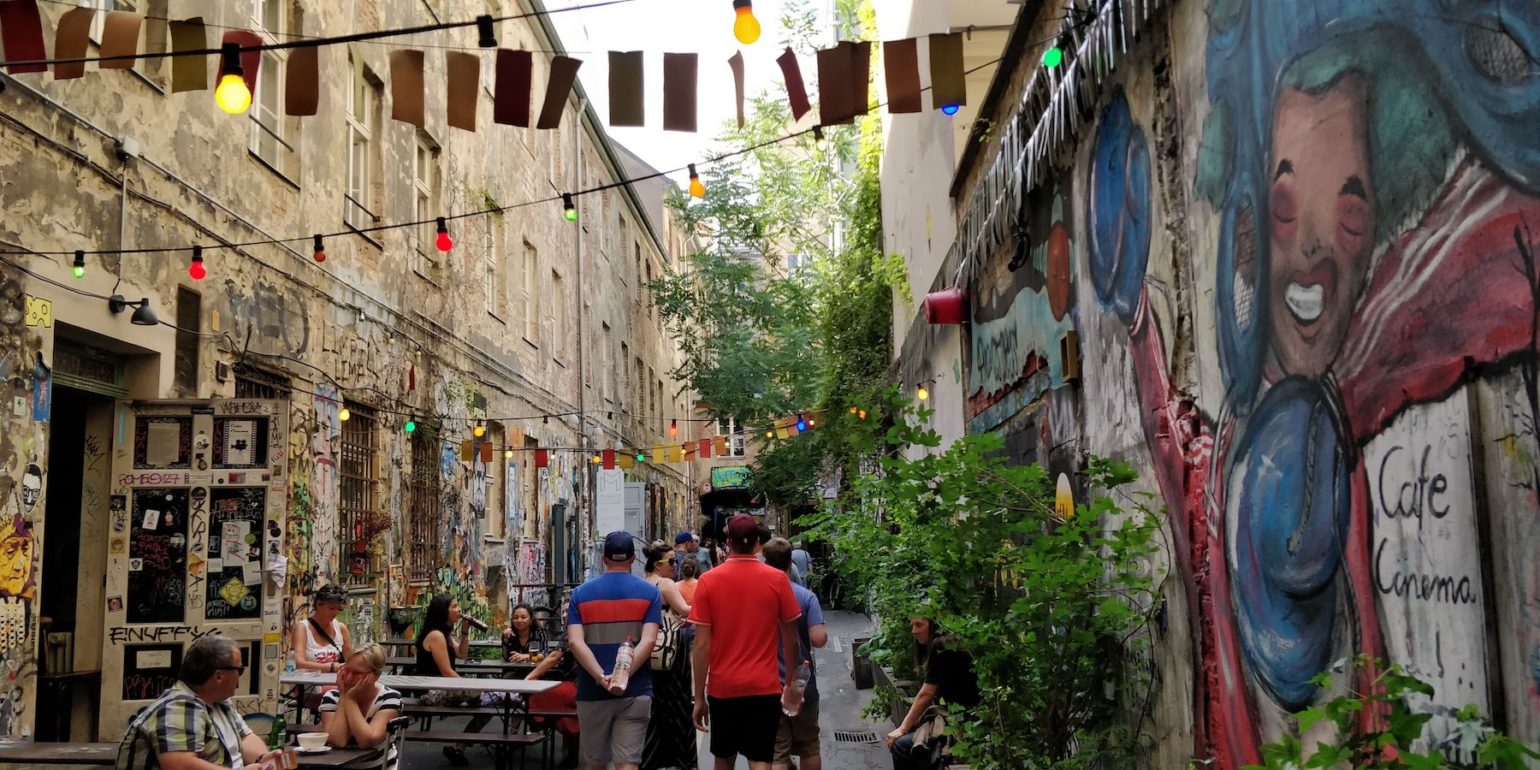 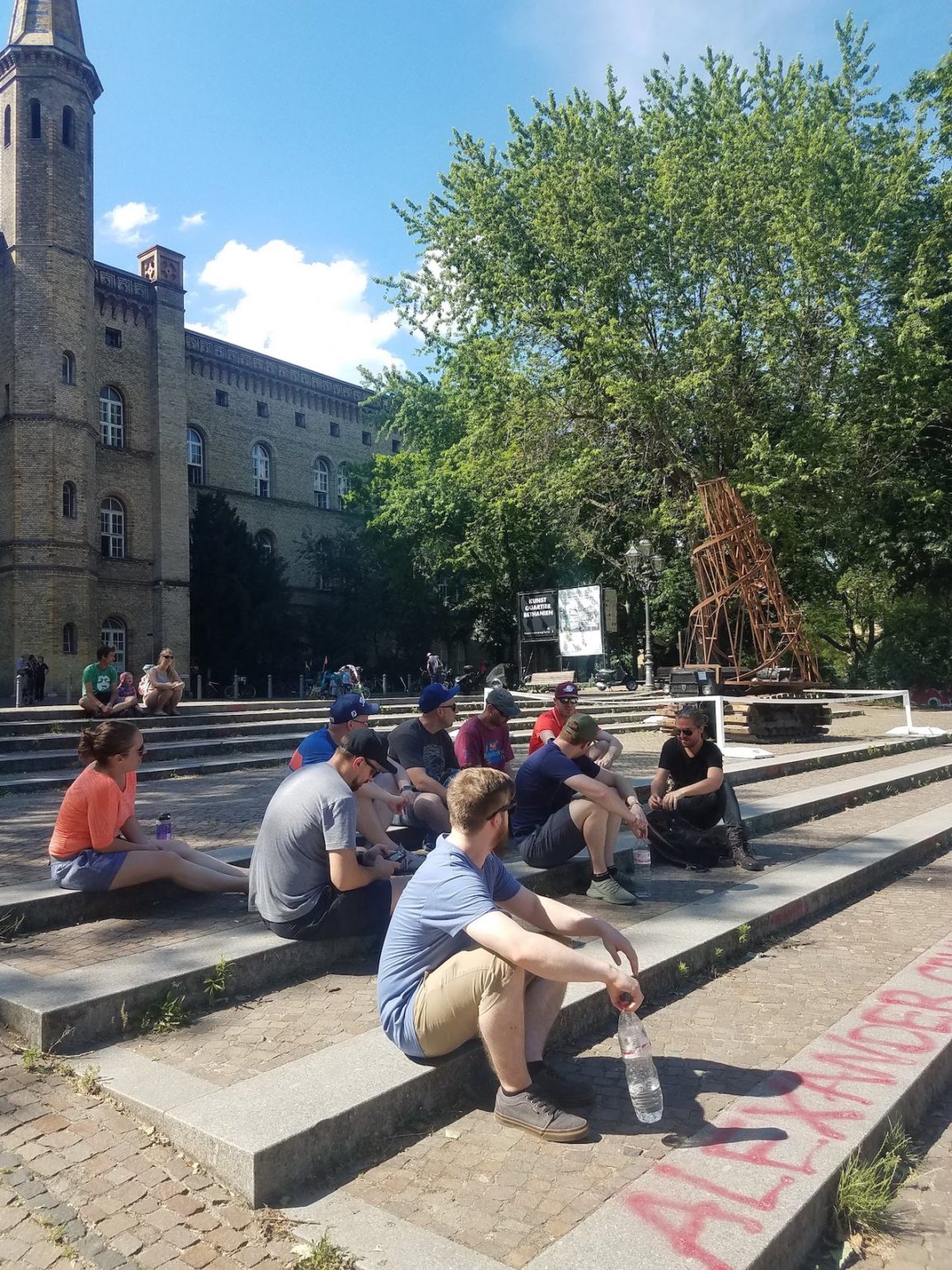 I learned this team takes their go-karting seriously. Getting out on the track was a really fun time, no matter how sore my arms were afterwards. The track was no match for our resident karting expert, Gilbert, who only needed to ask for a replacement kart once. 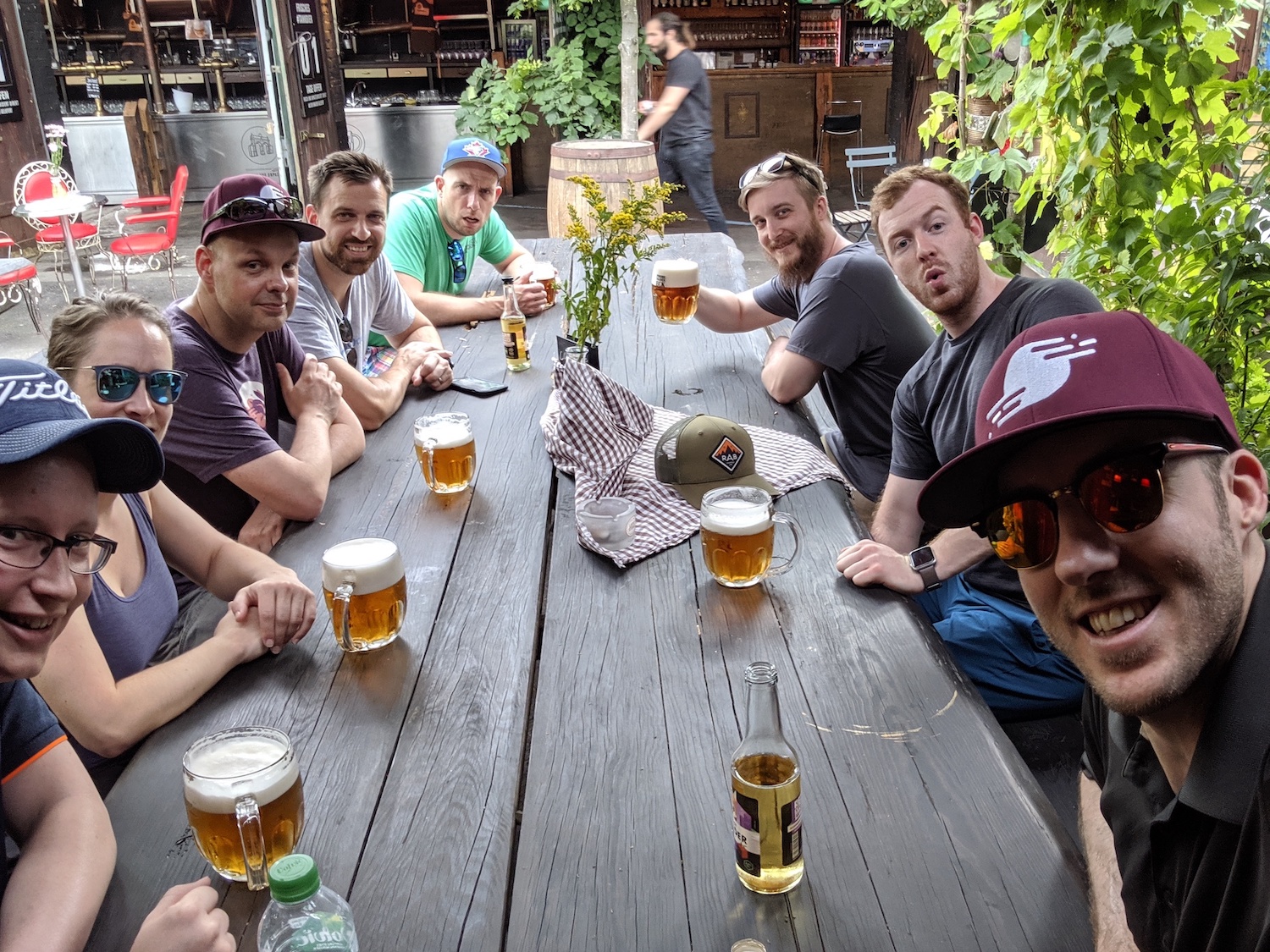 Of course, going to WordCamp Europe was amazing (if you couldn’t attend or might not have caught everything, our recap will catch you up on what you may have missed). It had been a few years since the team had a retreat based around a conference and it seemed like everyone enjoyed this format. It allowed for more networking which isn’t always as easy when you work remotely.

This year’s retreat was a little more expensive than last year’s but we also had one more person attending. The cost per person remained about the same. Here’s the breakdown:

At the end of the retreat, we found out the next WordCamp Europe was going to be in Porto, Portugal. We had already been considering sticking to the conference-based retreat format and this intrigued us even more. It’d be great to see Porto and catch up with the WordPress community again.

I’ll be looking forward to seeing the team again in-person next year. While working remotely is amazing for concentration and lifestyle, you can’t beat catching up with everyone in real life.

Will you be attending WCEU next year? Did your company go on a retreat this year? Where did you go?