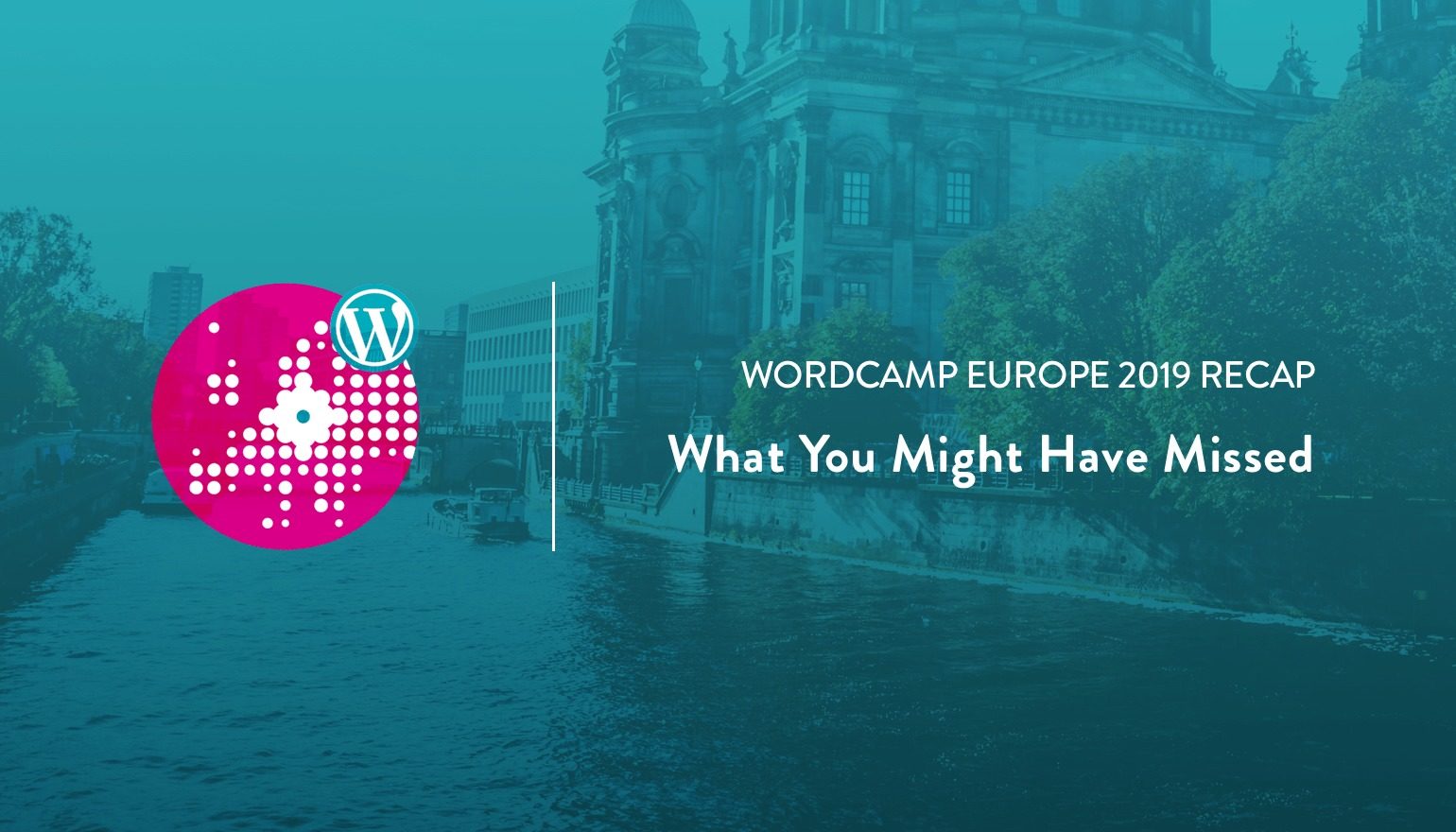 It was the first WordCamp we had attended together as part of a retreat since Vienna in 2016, and even though I have been skeptical about the benefits of WordCamps for developers in the past, this WordCamp was actually really great.

If you couldn’t attend or might not have caught everything, let me catch you up on what you might have missed.

The Biggest WordPress Event Yet

WCEU Berlin was the biggest WordPress event ever, breaking a number of records. An incredible 3260 tickets were sold, 2734 attendees present, with over 56% of them attending their first ever WordCamp. There were 80 organizers, 167 volunteers, 60 speakers, and 60 sponsors. Yet despite its size, the WordCamp still felt like a close community event. A place to catch up with old friends and meet new ones.

In a break from his normal WCEU Q&A format, Matt Mullenweg delivered an update of Gutenberg. A year ago Gutenberg was still a plugin and hadn’t been merged into Core, surrounded by controversy, criticism and debate if it would make or break WordPress itself. But in June 2019, all of that seems almost forgotten. The future of WordPress is clearly the block editor. Here’s a great thread on Matt’s keynote:

Matt took questions from the floor for the last part of his session which made for some interesting and sometimes uncomfortable listening. The first question – well, more of a lengthy rant – was about the alleged poor treatment of Envato by WordPress which had to be deftly deflected by the emcee who later posted an updated on Twitter:

Most questions were fielded expertly by Matt, but a couple of tough questions around the future of themes, accessibility of the block editor, democratization of the project, and the future of Trac (the bug tracker and project management tool WordPress uses) got the crowd excited.

There are many aspects to a WordCamp, and with 3 talk tracks, it’s hard to see all the talks you want to. I tried not to worry about that too much, and only attended a few talks in the end, preferring to spend time in the “hallway track” instead and catch the talks on WordPress TV when they come out or on the livestream videos.

Of course, Matt Mullenweg’s session was a must, but other than that, there were a few standouts that the team attended.

I find attending technical talks at an event like this a bit hit and miss. Some topics that seemed advanced on paper don’t go into much detail in the actual talk, but on the flip side, I don’t want to be staring at slide after slide of code snippets. The best talks are stories. And this is exactly why Kevin Stover, of Ninja Forms, nailed his talk.

Why I Walked More than 700km to Berlin, and Survived

Marcel Bootsman walked 700km in an epic journey to WCEU to raise money for DonateWC and spoke at the event about why he did it. What an achievement! He even got is own Marcel Wapuu:

A few of the Delicious Brains team attended this John James Jacoby talk about rethinking how WordPress should handle custom tables with a view to getting something merged into Core. I didn’t get to see it but I caught up with JJJ on Saturday and we discussed his proposal, especially as I have rolled our own database table migration scripts and ORM for reading and writing the table data. JJJ’s slides can be found here.

Gilbert attended two lightning talks on the first day from Rahul Bansal and Rob Hope respectively. Both talks were stuffed full of small chunks of actionable advice from experienced people and because they were lightning talks they couldn’t afford to waffle.

Rahul spoke about making sure you deliver value to your customers by aiming for delight and not just simply meeting expectations.

Rob’s landing page talk was a good reminder of focusing on how to get the all-important conversion by being focused on the problem, addressing doubt in the copy, and using testimonials to add social proof.

As I mentioned before, WordCamps are much more about the community for me; meeting people I have only ever spoken to on Twitter, people who have used our plugins, or I have come across through my side projects, as well as folks I have actually met before at previous events.

This year I decided to be more intentional about meeting people instead of hoping I’d bump into them and then get the opportunity to say hi. I reached out to around a dozen folks on Twitter or by email weeks before the event saying I would be at the conference and it would be great to meet and catch up. This proved a great way of putting faces to names and having some great chats. I managed to meet everyone I had wanted to as well as lots more.

Networking at events like this can be scary and isn’t for everyone. It can be made easier if you attend as part of a group so if one person knows someone they can then introduce the others and have a good group chat. The Pac-Man rule can also come in handy:

This kind of in-person meeting is valuable for building relationships that can make attending events easier in the future, but they can also be great for professional development. Meeting representatives of companies you’d like to work for, other freelancers you could partner up with, plugin companies you could develop add ons for, are just a few of the opportunities to be found at WordCamps.

Although as a team we did attend quite a few sessions, we all enjoyed getting to talk with potential customers, existing users, other product teams and other community members in the “hallway track”.

One of the coolest things had to be that although it had been just a few weeks since we launched SpinupWP out of beta, we heard a lot of unsolicited positive feedback about SpinupWP and even got to talk to some people who had questions and hear feedback and feature requests in person:

We also learned that the Amazon Lightsail folks use WP Offload Media and recommend it for their platform. Brad even bumped into someone wearing our WP Migrate DB Pro t-shirt who turned out to be a big fan of WP Migrate DB Pro and SpinupWP (shout out to the App Saloon dev team in Belgium).

At the end of the event, the next year’s venue was announced – the city of Porto in Portugal.

We took a break from attending a WordCamp as part of our retreats in 2017 and 2018, but as WCEU 2019 was such a blast and extremely helpful for us as a product company, coupled with the fact we had previously discussed Portugal as a possible retreat location, Porto 2020 could be our next destination!

If you attended WCEU what were your highlights? If you haven’t attended a WordCamp Europe before, has this post encouraged you to check out the next one? Let us know in the comments.