You know that a fast site == happier users, improved ranking from Google, and increased conversions. Maybe you even think your WordPress site is as fast as it can be – you’ve looked at site performance, from the best practices of setting up a server, to troubleshooting slow code, and offloading your images to a CDN, but is that everything?

With dynamic database-driven websites like WordPress, you might still have one problem on your hands: database queries slowing down your site.

In this post, I’ll take you through how to identify the queries causing bottlenecks, how to understand the problems with them, along with quick fixes and other approaches to speed things up. I’ll be using an actual query we recently tackled that was slowing things down on the customer portal of deliciousbrains.com.

The first step in fixing slow SQL queries is to find them. Ashley has sung the praises of the debugging plugin Query Monitor on the blog before, and it’s the databases queries feature of the plugin that really makes it an invaluable tool for identifying slow SQL queries. The plugin reports on all the database queries executed during the page request. It allows you to filter them by the code or component (the plugin, theme or WordPress core) calling them, and highlights duplicate and slow queries:

If you don’t want to install a debugging plugin on a production site (maybe you’re worried about adding some performance overhead) you can opt to turn on the MySQL Slow Query Log, which logs all queries that take a certain amount of time to execute. This is relatively simple to configure and set up where to log the queries to. As this is a server-level tweak, the performance hit will be less that a debugging plugin on the site, but should be turned off when not using it.

Once you have found an expensive query that you want to improve, the next step is to try to understand what is making the query slow. Recently during development to our site, we found a query that was taking around 8 seconds to execute!

We use WooCommerce and a customized version of the WooCommerce Software Subscriptions plugin to run our plugins store. The purpose of this query is to get all subscriptions for a customer where we know their customer number. WooCommerce has a somewhat complex data model, in that even though an order is stored as a custom post type, the id of the customer (for stores where each customer gets a WordPress user created for them) is not stored as the post_author, but instead as a piece of post meta data. There are also a couple of joins to custom tables created by the software subscriptions plugin. Let’s dive in to understand the query more.

MySQL is your Friend

MySQL has a handy statement DESCRIBE which can be used to output information about a table’s structure such as its columns, data types, defaults. So if you execute DESCRIBE wp_postmeta; you will see the following results:

That’s cool, but you may already know about it. But did you know that the DESCRIBE statement prefix can actually be used on SELECT, INSERT, UPDATE, REPLACE and DELETE statements? This is more commonly known by its synonym EXPLAIN and will give us detailed information about how the statement will be executed.

Here are the results for our slow query:

At first glance, this isn’t very easy to interpret. Luckily the folks over at SitePoint have put together a comprehensive guide to understanding the statement.

The most important column is type, which describes how the tables are joined. If you see ALL then that means MySQL is reading the whole table from disk, increasing I/O rates and putting load on the CPU. This is know as a “full table scan” – more on that later.

The rows column is also a good indication of what MySQL is having to do, as this shows how many rows it has looked in to find a result.

Explain also gives us more information we can use to optimize. For example, the pm2 table (wp_postmeta), it is telling us we are Using filesort, because we are asking the results to be sorted using an ORDER BY clause on the statement. If we were also grouping the query we would be adding overhead to the execution.

MySQL Workbench is another handy, free tool for this type of investigation. For databases running on MySQL 5.6 and above, the results of EXPLAIN can be outputted as JSON, and MySQL Workbench turns that JSON into a visual execution plan of the statement: 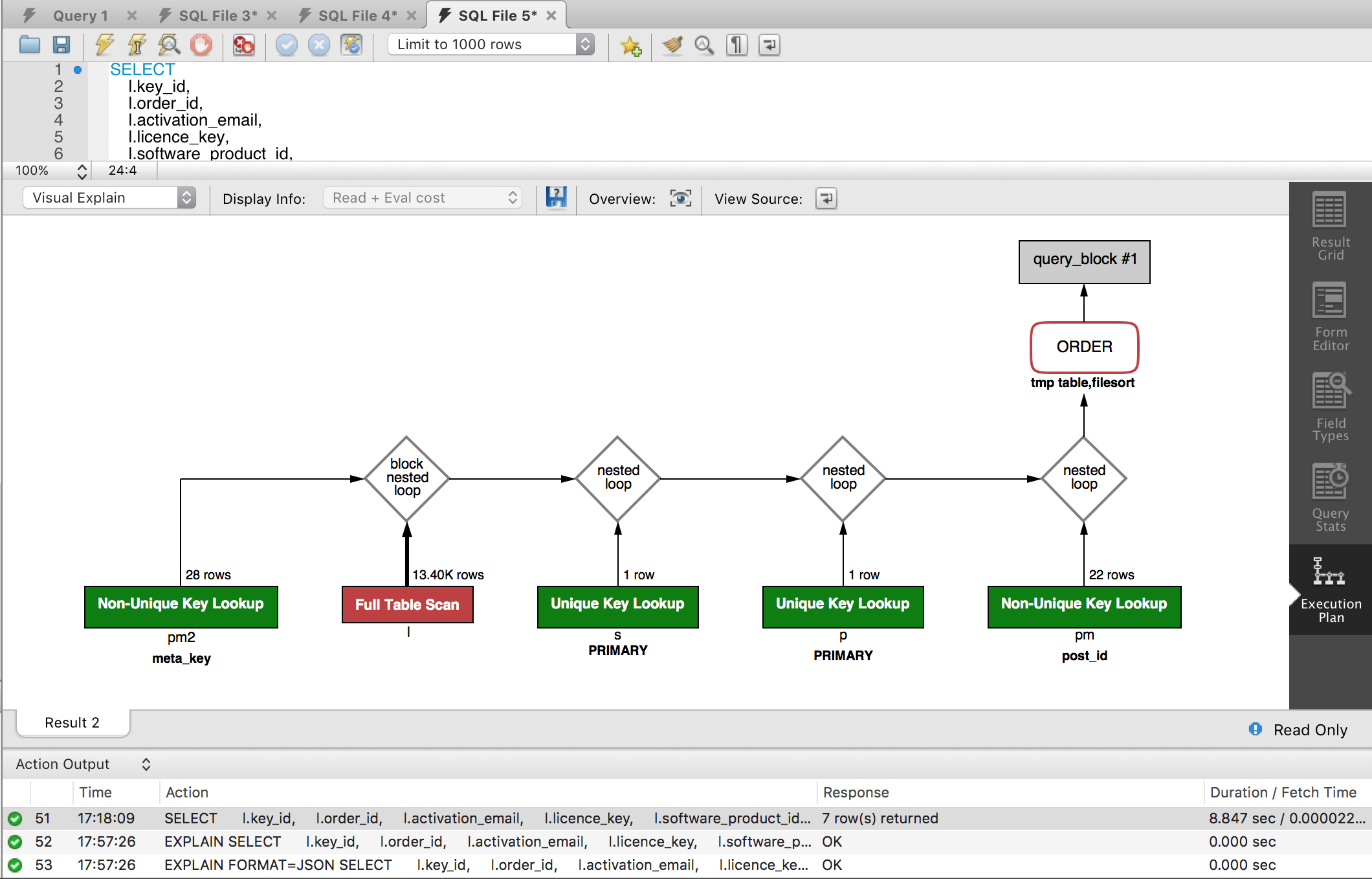 It automatically draws your attention to issues by coloring parts of the query by cost. We can see straight away that join to the wp_woocommerce_software_licences (alias l) table has a serious issue.

That part of the query is performing a full table scan, which you should try to avoid, as it uses a non-indexed column order_id as the join between the wp_woocommerce_software_licences table to the wp_posts table. This is a common issue for slow queries and one that can be solved easily.

order_id is a pretty important piece of identifying data in the table, and if we are querying like this we really should have an index on the column, otherwise MySQL will literally scan each row of the table until it finds the rows needed. Let’s add an index and see what that does:

Wow, we’ve managed to shave over 5 seconds off the query by adding that index, good job!

Examine the query – join by join, subquery by subquery. Does it do things it doesn’t need to? Can optimizations be made?

In this case we join the licenses table to the posts table using the order_id all the while restricting the statement to post types of shop_order. This is to enforce data integrity to make sure we are only using the correct order records, however, it is actually a redundant part of the query. We know that it’s a safe bet that a software license row in the table has an order_id relating to the WooCommerce order in the posts table, as this is enforced in PHP plugin code. Let’s remove the join and see if that improves things:

That’s not a huge saving but the query is now under 3 seconds.

Cache All The Things!

If your server doesn’t have MySQL query caching on by default then it is worth turning on. This means MySQL will keep a record of all statements executed with the result, and if an identical statement is subsequently executed the cached results are returned. The cache doesn’t get stale, as MySQL flushes the cache when tables are changed.

Query Monitor found our query to be running 4 times on a single page load, and although it’s good to have MySQL query caching on, duplicate reads to the database in one request should really be avoided full stop. Static caching in your PHP code is a simple and very effective way to solve this issue. Basically you are fetching the results of a query from the database the first time it is requested and storing them in static property of a class, and then subsequent calls will return the results from the static property:

The cache has a lifespan of the request, more specifically that of the instantiated object. If you are looking at persisting query results across requests, then you would need to implement a persistent Object Cache. However, your code would need to be responsible for setting the cache, and invalidating the cache entry when the underlying data changes.

Thinking Outside the Box

There are other approaches we can take to try and speed up query execution that involve a bit more work than just tweaking the query or adding an index. One of the slowest parts of our query is the work done to join the tables to go from customer id to product id, and we have to do this for every customer. What if we did all that joining just once, so we could just grab the customer’s data when we need it?

You could denormalize the data by creating a table that stores the license data, along with the user id and product id for all licenses and just query against that for a specific customer. You would need to rebuild the table using MySQL triggers on INSERT/UPDATE/DELETE to the licenses table (or others depending on how the data could change) but this would significalntly improve the performance of querying that data.

Similarly, if a number of joins slow down your query in MySQL, it might be quicker to break the query into two or more statements and execute them separately in PHP and then collect and filter the results in code. Laravel does something similar by eager loading relationships in Eloquent.

WordPress can be prone to slower queries on the wp_posts table, if you have a large amount of data, and many different custom post types. If you are finding querying for your post type slow, then consider moving away from the custom post type storage model and to a custom table – more on that in a later post 😄.

With these approaches to query optimization we managed to take our query down from 8 seconds down to just over 2 seconds, and reducing the amount of times it was called from 4 to 1. As a note, those query times were recorded when running on our development environment and would be quicker on production.

I hope this has been a helpful guide to tracking down slow queries and fixing them up. Query optimization might seem like a scary task, but as soon as you try it out and have some quick wins you’ll start to get the bug and want to improve things even further.

Do you have any tips for query optimization or tools you like to use? Let us know in the comments.