Up until recently I’d attended only four WordCamps in my time in the WordPress community. And although I generally enjoyed each one, I came away feeling that WordCamps weren’t that beneficial — for developers. A lot of the talks were aimed at non-developers (the WordPress community of course includes more than just us devs) and even the developer-focused talks I attended were often not advanced or substantial enough to feel that I gained anything from them.

Some of our developer team shared the same opinion after attending WordCamps in Miami and Vienna as part of our annual retreats and even deliberately organized the last two without a WordCamp to attend as a result.

However, after over two years of not attending a WordCamp, I recently made the trip to sunny Brighton in the UK, for this year’s WordCamp Brighton and had perhaps the most fulfilling WordCamp yet.

Let me tell you why I’ve changed my mind and why I now believe WordCamps hold great value for developers.

Why I Thought WordCamps Didn’t Work For Devs

WordCamps are a very different kind of conference. They are unique in many ways, from the low ticket prices, to the diverse range of talk topics. The WordPress community is a wonderfully diverse and broad spectrum of people, from the first-time site owners to high-end enterprise agencies and with that comes a wide variety of talk topics for all different levels. This can be a jarring change of pace for developers used to other, more technical, non-WordPress conferences.

I used to think this was a WordCamp issue but recently realized it was an attendee issue (me!), and have learned to embrace the eclectic mix of talks, people and experiences on offer at a WordCamp. Mainly thanks to WordCamp Brighton 2018. (I swear this isn’t a sponsored post.)

How WordCamp Brighton Changed My Mind

The conference schedule was inverted to what I was accustomed to, with the two days of talks starting on the Friday and the contributor day bookending the WordCamp on the Sunday. This was great as, even though I had prior commitments at the weekend, I could still attend one of the days of talks on the Friday. So when I say it was probably the best WordCamp I’ve been to, considering I only attended less than half of it, it’s quite a statement.

The WordCamp was an extremely well-organized, inclusive, and diversity-focused conference. Vegan only food was served for lunch and reusable water bottles and hot drinks cups were given as swag. There was a quiet room, a retro games room, stickers for people who didn’t want to be photographed and numerous workshops running alongside the main talk track.

Don’t Judge a Talk by Its Title

When I checked the first talk of the day after the opening remarks I was a little disappointed that it was a very non-developer talk. However, “Exploring mindfulness as a tool for well-being and connection” from Fiona Clarke was both interesting and useful. Practicing mindfulness can calm the mind and improve productivity, especially when we are “running multiple to-do lists in our head” all the time.

Mindful listening is also a key skill to have for team members and leaders alike. A lot of her talk resonated with me, especially communication in teams and learning to be less reactive (she took up mindfulness when she had small children).

One of the stand out talks of the day for me was “Colour on the web: colour theory, usability and accessibility” by Piccia Neri. Again this was a talk that initially I didn’t think would be relevant or helpful as I do little design in my day to day work. But it turns out colors in general are a very interesting subject and it becomes even more important when using colors on the web, especially around accessibility – which is everyone’s responsibility, not just designers or accessibility consultants – developers as well.

These talks on the face of it weren’t typical developer content, however if you look past the title you realize that the information delivered can still apply to you and benefit you as a developer.

The schedule did cater for obvious developer needs as well. Luminus Alabi gave a great talk about increasing your productivity by supercharging your local development environment using Valet+ and WP CLI. I’m a big fan of WP CLI already but learned a trick or two and Valet+ looked good enough to make me reconsider my lazy approach to sticking with MAMP Pro. He also talked about upgrading from Bash to Zsh and using oh my zsh which is on my to-do list now.

The first day finished with a varied group of people from the community; Alain Schlesser, Mika Epstein, Tammie Lister, and David Lockie, discussing the future of WordPress. 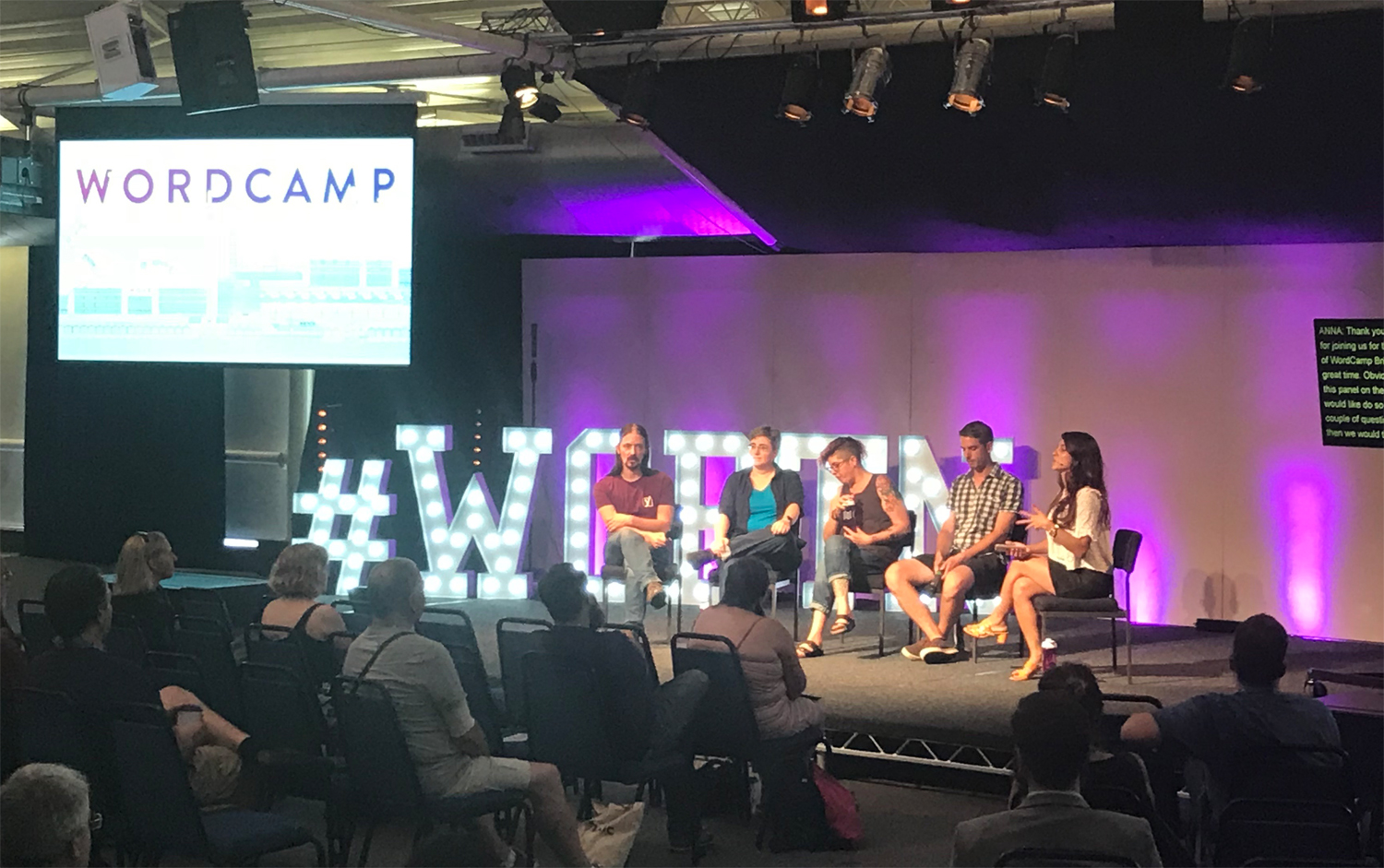 This format was a nice change from the talks and made for an interesting session as the host Ana Silva managed to get through a number of pre prepared questions and questions from the floor, all whilst managing interruptions and keeping to time. Questions were disappointingly sparse around Gutenberg and the perceived issues with the leadership and direction of the WordPress project, but it was good to get a balance of opinions from the stage.

As a developer you should be aware of what’s happening in the wider WordPress world, what’s coming down the pike and what changes might affect you, so it’s invaluable to get that level of insight from people at a WordCamp.

The organizers picked a good variety of talks with a general focus of wellbeing (mental health was prominent at the conference) which offered something for all attendees.

The Hallway Track Is What You Make of It

As with any WordCamp, sometimes the most interesting and beneficial interactions happen outside of the talks in the general area, often known as the Hallway Track. After attending a few WordCamps on my own and not really speaking to anyone, I didn’t make the most of what this aspect of a WordCamp has to offer. However, the more you go to WordCamps and local meetups the better you become at making new connections.

Sometimes these connections can lead to business opportunities or finding work. At WordCamp London in 2013 I started talking to the person sitting next to me, discussing development, and the plugin selling business. He told me about the plugin him and his business partner were working on (which I had actually heard of) and asked if I wanted to develop any addons for it. Which I did. Fast forward to 2018, Kevin and I are still good friends and I have built a number of Ninja Forms addons which have proved to be relatively financially successful as Ninja Forms itself has gone from strength to strength.

The majority of WordCamps have job boards where you can post if you are looking for work or hiring, and most big WordPress companies are represented making it possible to network easily.

If you sell themes, plugins, or other WordPress products, then WordCamps can be a great place to meet both customers and potential customers. I’ve met users of WP Migrate DB Pro at most WordCamps I’ve attended and even local meetups. You can get a direct line to feedback about your products and even better, find out about current pain points for users that might just spark your next product idea!

That all being said, I still would like to see more developer focused conferences in the WordPress space. LoopConf is perhaps the biggest and only conference out there, if you don’t count WooConf and YoastCon, which are quite specific. Our very own Pete spoke at this year’s LoopConf and thoroughly enjoyed his whole experience.

However, I wish there was a conference similar to LoopConf in the UK which I think could really work. A WordCamp for developers perhaps. (Hit me up if you agree and think we should make this a reality).

But for now, I’ll keep going to WordCamps to get my fix of WordPress goodness and continue to embrace all they have to offer. Indeed, the Delicious Brains team plans to descend on Berlin next year for WordCamp Europe for our annual retreat, and no doubt my newfound enthusiasm will infect/annoy my teammates! (Update: Couldn’t attend WordCamp Europe this year? Check out my WordCamp Europe 2019 Recap.)

Are you a developer who doesn’t think WordCamps can benefit them? Perhaps it’s time to reconsider.

If you are a WordCamp goer, what do you find the most beneficial parts? If you do know of any WordCamps with a reputation for good developer talks/tracks then let us know in the comments below.